912
Facebook Twitter LinkedIn Google+ Pinterest WhatsApp Email Copy Link Your browser does not support automatic copying, please select and copy the link in the text box, then paste it where you need it. 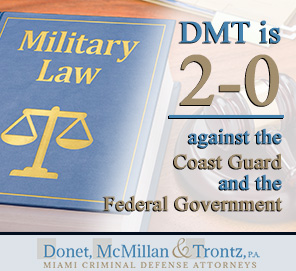 Recently, Donet, McMillan & Trontz defended a Coast Guard Veteran against very serious charges in a Miami court-martial. One of our lead attorneys, David Trontz, shares his unique experience in military law, the facts of the case, and unique distinctions about military law and civilian law in the blog that follows:

Although DMT primarily practices criminal defense, I, David Trontz, served five years on active duty in the United States Army. I spent those five years trying cases in the 82nd Airborne Division, the 2nd and 3rd Infantry Divisions. Having tried in excess of thirty courts-martial, I brought this experience to DMT, which allows us to practice certain areas of military law. DMT has represented military members from every branch of service in both civil and military tribunals throughout the State of Florida and in other states as well. Recently, I defended a Lieutenant Commander in the United States Coast Guard. The seventeen-year veteran was charged with assault consummated by a battery and conduct unbecoming an officer. The commanding Admiral referred the case to a special court-martial. While our client had a Navy lawyer appointed to represent him, he decided to hire a civilian lawyer with military experience who would not be influenced by the military. Our client hired us six weeks before the trial.

The facts of the case were fairly simple. Our client's wife was in the Publix at Mary Brickell Village. She was eight months pregnant and diagnosed with a high-risk pregnancy. While in Publix shopping with her lawfully licensed service dog, a man she never met before and who was not a Publix employee confronted the wife. The man verbally abused the client's wife until she was forced to leave the store crying. Our client arrived to help his wife finish the shopping.

While in the vegetable section, the man again confronted the client's wife about the dog. The surveillance video was pulled and showed the man take a step toward the woman. Our client stepped in between and shoved the man in the chest with an open hand forcing him to land in the tomatoes. The Miami Police were called, but did not make a report. The man contacted the Coast Guard who decided to unjustly prosecute our client. After a two-day trial, four Coast Guard Members, senior in rank to our client, acquitted him on both charges. 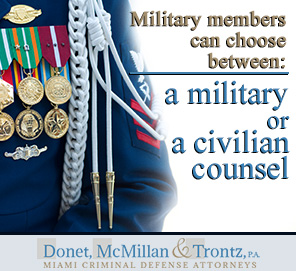 While practicing in Miami, this is the second United States Coast Guard Court-Martial we have defended. DMT is 2-0 against the Coast Guard and the federal government. My experience in the US Army as a trial counsel and defense counsel, along with my time at the Miami-Dade County State Attorney's Office and my 15 years of experience as a private criminal defense lawyer, leads to me to believe that I have pretty much seen everything necessary to successfully defend a military case. Although, I believe this particular Coast Guard member should not have been charged with a crime, the Coast Guard saw it differently. Our client needed help and needed it fast. He could have lost all of his military benefits, retirement, and spent a little time in a military jail. Due to our experience, he is back on the job and working towards his pension.

Our client spent no time in jail. Military law is different from civilian criminal justice, in that, the majority of defendants arrested by the civilian authorities are arrested and have to post a bond. In the military, to incarcerate a military member pending trial, the prosecutor must prove that the Defendant is a risk of flight and a significant danger to others. These are very difficult thresholds to overcome when dealing with military magistrates.

Our client, as is every military member, is entitled to a military defense lawyer (sort of like having the right to a public defender). However, military members have the right to hire civilian counsel at the member's expense. The Navy JAG Officer I tried the case with had eight years of experience and had defended many cases. Our client felt more comfortable with me at the helm because of my twenty-three years of experience.

Our client was questioned by the Coast Guard Investigative Service. Wisely, he invoked his right to counsel. By not making a statement, we were able to tailor our defense based on the facts and the video surveillance. If our client chose to make a statement, it may have limited our ability to pursue our defense (defense of others). Whether someone is a civilian or military member, one should always invoke their right to remain silent and the right to have a lawyer present during questioning. Admissions are the easiest way for the government or the state to introduce the statements as evidence and use them as the cornerstone of their case.

Are you facing court-martial? Donet, McMillan & Trontz has over 23 years of military law experience  contact us for a consultation at (305) 444-0030 today.
Categories: Military Law
912
Facebook Twitter LinkedIn Google+ Pinterest WhatsApp Email Copy Link Your browser does not support automatic copying, please select and copy the link in the text box, then paste it where you need it.
Don't Miss These Other Must Read Articles