1.29k
Facebook Twitter LinkedIn Google+ Pinterest WhatsApp Email Copy Link Your browser does not support automatic copying, please select and copy the link in the text box, then paste it where you need it. 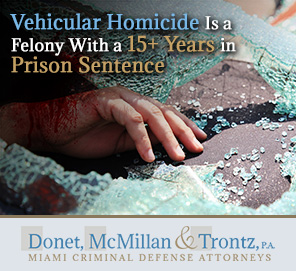 Accidents are not always predictable, especially when driving a car at high speeds. In South Florida, we have some of the highest speed limits in the country  which is a great benefit to drivers, but like all states, we do have to deal with our share of car accidents. Sometimes, a car accident that results in a serious injury or death of a passenger can mean felony charges for the traffic crime traffic crime if the State decides to pursue it.

We recently dealt with a challenging case in Miami-Dade County. Our young client was driving a vehicle at night and went off the road. Both he and his passenger were ejected, and tragically, his passenger died as a result of the injuries from the accident. The State of Florida alleged that our client operated a motor vehicle in a reckless manner. Some of the evidence against our client sounds very strong: blood tests proved that our client drove a vehicle after drinking alcohol, and further investigation showed that he was speeding at the time of the accident. He also ignored a stop sign. The state wanted to charge him with a felony: Vehicular Homicide.

What Is Vehicular Homicide?

Vehicular Homicide is a felony in the state of Florida, and our client was facing 15 years in prison if convicted. The charge is defined as the killing of a human being caused by the operation of a motor vehicle by another in a reckless manner likely to cause the death of, or great bodily harm.

The Facts of the Case

In his statement to the police, the client estimated his speed at approximately 50 MPH. The police estimated his speed at 60 MPH. The Sensing Diagnostic Module (Black Box) recovered from the car listed the speed, five seconds before the crash, at 82 MPH. Prior to 162 Avenue, the client realized that the Road ended. He immediately applied the brakes. Despite his instant application of the brakes, the car skidded off the roadway into the farm field where it struck a dirt mound. The client and the victim (passenger) were ejected from the car. The passenger died shortly after the accident.

Our Client's State of Mind

Police personnel observed no physical or mental indicia of drug or alcohol impairment to our client's normal faculties. The initial officer testified that "He had been drinking but... I cannot tell you what signs because we don't write on the report." Another officer testified that he detected an odor of alcohol on the client's breath, but he "didn't think it was a lot." He went on to say that he did not have the client perform roadside exercises; therefore, he could only speculate as to his impairment. An officer with Impaired Driver Enforcement Squad stated, "I didn't see any overt signs of drug impairment, no contraband was found, and he made no admissions about that."

The client consented to the police request to withdraw his blood for testing. The Final Toxicology Report rendered a Blood Ethanol level of 0.031g/100ml. This report also indicates a "9-Carboxy-THC, controlled substance, Positive" and "THC, controlled substance, Not Detected." No evidence of marijuana use by the client was recovered. No drug paraphernalia was recovered from the scene. The client exhibited no physical signs of marijuana use. He was not asked about, nor did he admit to any marijuana use.

The Forensic Toxicologist for the State of Florida reported that THC was not a contributing factor to this accident. His opinion is based upon the fact that the client's blood reading revealed 9-Carboxy-THC, which is an inactive metabolite. Furthermore, the client's blood screening did not detect the presence of THC. As such, the experts position was that the client was last exposed to marijuana several hours prior to his blood being withdrawn. 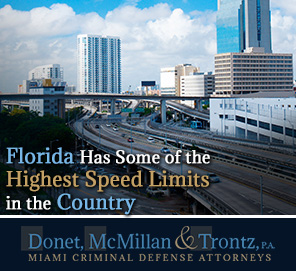 Why Did the State Pursue Vehicular Homicide Charges?

With the blood toxicology report showing a small amount of alcohol in our client's system, the State of Florida filed vehicular homicide charges. Combined with the evidence of speeding, the state's attorney felt it fit the crime.

We felt strongly that the facts and evidence in this case did not support this charge. It was a tragic accident, but we did not feel that it was a felony crime. We therefore aggressively defended the case to the end. We did not want to settle and have the client go to prison for an incident that we felt was a questionable crime.

Vehicular Homicide Was an Overreach

We argued that the car accident lacked sufficient evidence to establish a vehicular homicide. No THC was detected in his blood. No evidence existed to suggest that he was under the influence of any controlled substance. In fact, the blood alcohol reading of .031 mandated a statutory presumption that he was not impaired. This evidence established that his normal faculties were not impaired by drugs or alcohol.

Here, the client was not intoxicated. While his speed on a dark, unfamiliar stretch of Coral Reef Drive exceeded the posted limit; such conduct only rises to the level of negligence.

What's the Difference Between Negligence and Vehicular Homicide?

We argued that a motion to dismiss should be granted when the facts and inferences, in the light most favorable to the state, did establish a case.

His only culpability for this accident is speeding, and appellate courts in Florida have consistently endorsed the maxim that speed alone will not support a charge of vehicular homicide.

Ultimately, the State of Florida agreed to reduce their plea offer from a sentence of state prison to straight probation. The client would not have to serve any jail or prison time. This was a tremendous accomplishment. However, we still felt that the charge should be reduced to nothing more than a speeding ticket. The prosecutors disagreed. The best they would offer on the case was a no jail offer.

This left the client with a decision to go ahead with a jury trial or accept a plea to a felony that would include no jail time. We advised the client that we were confident that a jury would not convict him of a felony charge.

The client was not willing to go forward with a jury trial and risk the possibility of being convicted a felony. As such, against our advice and counsel he agreed to enter a plea of no contest to the charge and receive a sentence of probation.

We always seek a realistic and ideal outcome for our clients. We are not intimidated by the State's Prosecutors and we have decades of experience in the South Florida area. If you're looking for dedicated defense lawyers, contact Donet, McMillan & Trontz at (305) 444-0030 today.

Categories: Juvenile Cases
1.29k
Facebook Twitter LinkedIn Google+ Pinterest WhatsApp Email Copy Link Your browser does not support automatic copying, please select and copy the link in the text box, then paste it where you need it.
Don't Miss These Other Must Read Articles