943
Facebook Twitter LinkedIn Google+ Pinterest WhatsApp Email Copy Link Your browser does not support automatic copying, please select and copy the link in the text box, then paste it where you need it. 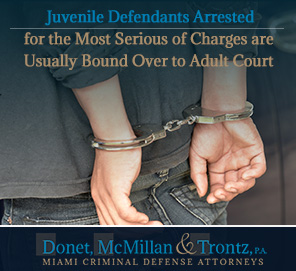 A recent article noted that juveniles that are transferred to adult court in the State of Florida receive on average more incarceration time than adults. The author of the article suggests that there may be a couple of reasons for this occurrence. He suggested that judges may sentence juveniles more harshly as their alleged crimes were serious enough to have them transferred out of juvenile court. He also suggested that judges are concerned with the high rate of recidivism among youthful offenders and the only way to deter them from reoffending in the future is by imposing longer jail or prison sentences. As your Miami criminal defense attorneys, we'd like to shed some light on the juvenile court system and whether or not this statistic makes sense.

What Does Florida Law Say?

Florida Statute 985 deals strictly with the juvenile justice process. The majority of juveniles arrested have their cases disposed of in the juvenile court system. The punishments are fairly lenient with the most serious receiving short periods of incarceration in facilities housing only juvenile defendants. However, juvenile defendants arrested for the most serious of charges such as carjacking or armed robbery are usually bound over to adult court, especially in Miami-Dade County. Prosecutors in charge of the juvenile division make decisions on a case-by-case basis in determining which cases should be handled in juvenile court and which ones should be dealt with adult circuit court.

Why Does This Happen?

The criminal lawyers at DMT have represented juvenile clients in both juvenile and circuit court. The author used data from the Florida Sentencing Guidelines Database, which is maintained by the Florida Department of Corrections. According to his calculations, juveniles transferred to circuit court receive 27.4 percent longer periods of incarceration than adult defendants. In our opinion, there is a simple explanation for sentencing disparity. Juveniles that are bound over to adult court are facing, in the majority of cases, the most serious of offenses. Once the juvenile case arrives in circuit court, prosecutors use the same guidelines that are applied to adults. 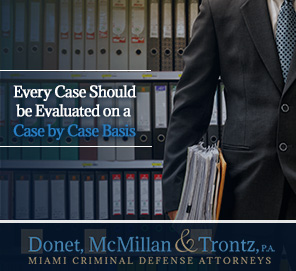 While juveniles that have been bound over to adult status are generally facing more time than an adult charged with a fairly simple felony charge. There are laws that can be used to limit the exposure of juvenile defendants. While it does not occur too often, circuit court judges can be persuaded on occasion to impose juvenile sanctions, despite the fact that the case was bound over to circuit court. Significant mitigation must be presented to the judge for this scenario to play out. Another protection afforded juvenile defendants is the Youthful Offender Statute. The statute caps a defendant's exposure to state prison up to six years. The six years can be served on probation, in prison or a combination of both.

In our opinion, assuming the state has a strong case, the "boot camp" program is an excellent way to keep a juvenile defendant out of prison and also give the opportunity to straighten our his or her life. The boot camp program is meant for juvenile and youthful offenders. The young defendants are required to successfully complete the military style camp while residing in a barracks. Once the boot camp phase is successfully completed, the young defendants are permitted to return home and complete the aftercare program which includes schooling, vocational training and eventually obtaining employment.

While the aforementioned information is useful to help reduce juvenile defendants' sentences, every case should be evaluated on a case by case basis. Cases that are defensible may need to procced to trial. Prior to entering a plea, juvenile defendants should retain an experienced Miami criminal attorney to thoroughly evaluate the case before the decision to enter into a pea is decided. Items seized or statements made by an offender may be suppressed at a pre-trial hearing which could prevent the state from proceeding to trial.

Are you dealing with a juvenile court case that may be bound over to adult court? If so, contact Donet, McMillan & Trontz at (305) 444-0030 to learn more about how to handle what you or your loved ones may be facing in court.

Categories: Juvenile Cases
943
Facebook Twitter LinkedIn Google+ Pinterest WhatsApp Email Copy Link Your browser does not support automatic copying, please select and copy the link in the text box, then paste it where you need it.
Don't Miss These Other Must Read Articles