1.83k
Facebook Twitter LinkedIn Google+ Pinterest WhatsApp Email Copy Link Your browser does not support automatic copying, please select and copy the link in the text box, then paste it where you need it. 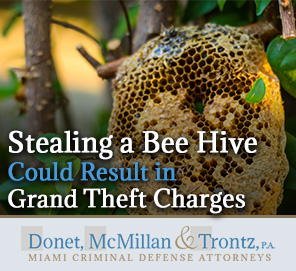 In Southwest Florida, a string of beehive thefts is puzzling and upsetting many businesses. While the theft of bee hives has not been a common occurrence in the past, and the theft of bee hives seem like no big deal, individuals arrested for stealing bee hives can find themselves in a lot of hot water. Judges and prosecutors in the areas where the thefts are occurring are likely to take a dim view of the culprits as citizens' businesses and livelihoods will be affected.

What Are the Consequences for Beehive Theft? 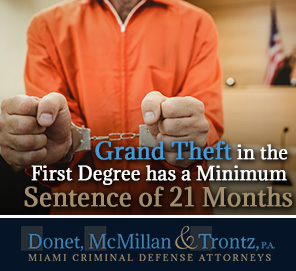 How Can You Prove Beehive Theft?

While the thefts of bee hives are undoubtedly occurring, it is up to local and state law enforcement authorities to catch suspects in these thefts. Not only must they catch the suspects, but prosecutors must will actually have evidence to prove who committed the crimes. According to the article, the thieves are cutting fences and loading the beehives onto flatbed trucks in the middle of the night. Apparently, the owners of the beehives do not use security guards or surveillance videos to protect their property. Once the property is taken, it is very difficult for law enforcement to catch and the prosecutors to pursue charges.

Why Is It So Difficult to Prove Beehive Theft?

The individuals who purchase the stolen hives are unlikely to turn in their suppliers of the stolen hives. The hives are also not readily identifiable with serial numbers like other products that are stolen or resold. In sum, unless someone is caught actually stealing the hives, the likelihood of arrest and successful prosecution is very small, unless those arrested make admissions to their involvement in the crime. As a result of the numerous and rampant thefts, a multi-state task force has been created to catch the thieves. Even with the task-force out looking for these individuals, the cases will be difficult to prove unless they catch someone in the act.

A Strange, but Similar Case

DMT, PA has never represented someone accused of stealing beehives. However, we did represent two individuals arrested and charged with stealing 500 parakeets. While our clients were captured on surveillance video selling the birds to a local pet store, law enforcement officers could not prove that our clients actually stole the parakeets from the owners. Prior to their arrest, our clients contacted us about the investigation pending against them. We immediately contacted the investigators and let them know that we were representing both individuals and invoked their Miranda rights on their behalf.

A Criminal Defense Lawyer Can Protect You

Our clients did the right thing. If they would have admitted to the theft, their statements would have been used against them in conjunction with the surveillance video. Our early representation prevented both of their arrests and prosecutions. Anyone being investigated for a criminal offense will be best be served by seeking out a qualified and experienced Miami criminal lawyer or law firm to represent them. Anyone trying to defend themselves in an investigation and/or prosecution is being foolish and things will not likely end well. This rule applies to all cases, including: sex offenses, drug crimes, domestic violence, and any and all fraud or theft cases.

SF GATE
Categories: Theft Crimes
1.83k
Facebook Twitter LinkedIn Google+ Pinterest WhatsApp Email Copy Link Your browser does not support automatic copying, please select and copy the link in the text box, then paste it where you need it.
Don't Miss These Other Must Read Articles