Local Crime Lab Suspends DNA Testing. What Does This Mean for Defendants in Broward County?

953
Facebook Twitter LinkedIn Google+ Pinterest WhatsApp Email Copy Link Your browser does not support automatic copying, please select and copy the link in the text box, then paste it where you need it.

Criminal defendants in Broward County may be able to breathe a sigh of relief. It sounds 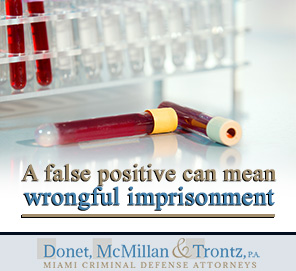 like fiction from a crime scene drama, but the reality is that, according to NBC Miami, the lab itself was analyzing certain batches of DNA incorrectly. As recently as 2015, some of the DNA evidence samples at a local crime lab were found to be improperly analyzed. As a result, the Sheriff's Crime Lab in Broward County is facing potentially losing its accreditation from the American Society of Crime Lab Directors Laboratory Accreditation Board. So, what effects will this have on Florida criminal law?

DNA and lab results are integral to solving cases for law enforcement nowadays  it wasn't always so. If you speak to a criminal defense attorney who practiced in the 1980s, you'll hear about a time when DNA couldn't be tested. In fact, the first use of DNA to exonerate a defendant was in 1987. That being said, crime labs have to undergo rigorous testing to be able to accurately and effectively analyze the DNA in question  and a false positive can mean the difference between false imprisonment and freedom for a defendant. So, what exactly is happening in Broward County, and what does this mean for defendants?

First of all, the lab is still in business, per se. What this means is, as of yet, the experts did not force the Sheriff's crime lab to suspend all DNA testing. The lab is still permitted to test isolated samples of DNA, but not evidence containing DNA from more than one person. However, the Broward County Sheriff's DNA lab lost the appeal, which was rejected by a three-person expert panel. The Sheriff was told that the lab needed to stop testing and producing conclusions regarding mixed DNA, or they would lose their accreditation to test any and all DNA samples.

What Happens If the Lab Fails to Comply?

The lab has since retained an approved laboratory to test mixed DNA samples while they attempt to correct the problem in the next 90 days. If the board is not satisfied with the lab's corrective measures, it could still lose its accreditation.

Defense attorneys will use this information to try to convince prosecutors that their cases involving DNA, especially mixed DNA, should be dismissed or be extended juicy plea offers. The results of pending cases with DNA evidence will depend on how much other independent evidence exists beyond the DNA that can be used to prosecute the cases. Defendant's convicted on cases will likely appeal their cases. Again, the results of the appeal will be highly dependent on how much additional non-DNA evidence was used as evidence in the case. Defense lawyers are jumping all over this information and are attempting to have all DNA evidence against their clients thrown out.


How Can Lab Standards Help Defend a Case? 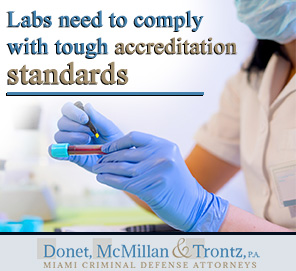 While I have not had any personal dealings with DNA cases out of Broward County, I have dealt with Medical Examiner's Office dealing with blood alcohol samples and drug testing. Over the years, the ME's office has had several problems and had been investigated several times for failing to comply with standards necessary for labs that conduct blood tests for alcohol and drugs. We defended a DUI with Serious Bodily Injury involving a US Navy Captain. Part the State's case relied on a .09 blood alcohol sample. The legal limit in the State of Florida is .08. We hired an expert out of Arizona that the determined that the lab's protocol for testing blood alcohol samples was woefully insufficient. This fact, along with a strong defense against the other evidence, led to a plea of careless driving, which is merely a traffic citation. This significant charge reduction saved the Captain's career in the Navy.

If you are facing a case or were convicted in South Florida based on evidence from one of these disputed tests, it may be possible to get that evidence thrown out. Contact Donet, McMillan and Trontz, PA at (305) 444-0030 if you need experienced attorneys to analyze every angle of your criminal charge.

Categories: Criminal Defense
953
Facebook Twitter LinkedIn Google+ Pinterest WhatsApp Email Copy Link Your browser does not support automatic copying, please select and copy the link in the text box, then paste it where you need it.
Don't Miss These Other Must Read Articles