People Are Dumping Garbage Illegally after Hurricane Irma. What Consequences Might They Face If They Are Caught?

681
Facebook Twitter LinkedIn Google+ Pinterest WhatsApp Email Copy Link Your browser does not support automatic copying, please select and copy the link in the text box, then paste it where you need it. 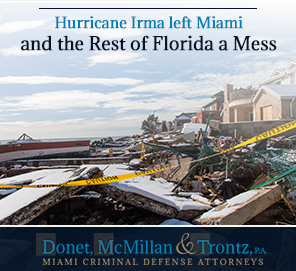 Post-disaster crimes irritate everybody, including the cops and prosecutors. Hurricane Irma left Miami and the rest of Florida a mess. In Miami, clean-up trucks were contracted to remove debris from the fronts of homes. One of the residents was relieved to see a clean-up truck outside his residence. Relief turned to anger when he realized that the men working from the vehicle were actually dumping litter as opposed to picking it up and removing it. Apparently, the entire State of Florida is dealing with the same problem. Contracted vehicles are picking up debris from neighborhoods and rather than delivering the waste to a designated disposal points, they are dumping it in neighborhoods so they get credit for removing the debris. This is a crime for which an offender will likely need Miami criminal lawyers.

While no arrests have been made, Crime Stoppers has requested information regarding the ongoing criminal conduct. Now that law enforcement is aware of the situation, it is wise for anyone involved in this activity to cease and desist before arrests are made. Anyone arrested for committing these acts will be arrested under what is referred to as the "Florida Litter Law". Florida Statute 403.413 prohibits dumping litter on private property.

What Are the Consequences of Illegal Dumping?

The penalties for violating the Florida Litter Law are largely dependent on the amount of litter that is dumped illegally and whether or not the litter is being dumped for commercial purposes. Commercial purpose is defined as the purpose of economic gain. Any person who dumps less than 15 pounds in weight, or 27 cubic feet in volume, and not for commercial gain, will merely be issued a civil citation including a $100 fine. Anyone who dumps in excess of 500 pounds, or 100 cubic feet of litter, can be charged with a first degree misdemeanor as long as it was not dumped for a commercial purpose. If dumped for a commercial purpose, the offense will be elevated to a third degree felony, which is punishable up to five years in prison. While anyone arrested for this offense is probably not looking at jail time, pre-trial diversion or probation is probably in the cards. The conditions of pre-trial diversion or probation will include a large amount of community service hours, removal of the litter dumped, and significant fines. 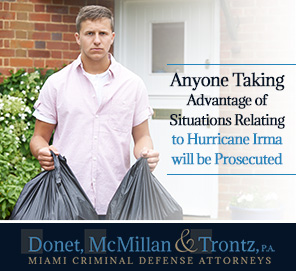 Where Do These Offenders Fit In?

The offenders that law enforcement are looking for will likely fall into the last category. Individuals charged with committing a felony will be arrested and have to post a bond. These folks will need to hire an experienced Miami criminal lawyer to defend the charges. The costs of illegal dumping will certainly not cover the fees to defend such a case. The best advice is to not illegally dump litter. However, if a person is arrested for this offense, the criminal attorneys at DMT will use their experience and skill to defend the charges and obtain an excellent result for their clients.

Another common crime is stealing or looting after a disaster. Stealing government property after a hurricane, whether it will be scrapped or not is a bad idea. Two men in Jacksonville, Florida found a downed utility pole and decided to strap it to the roof of their mini-van. While the pole was likely to be replaced, annoyed prosecutors could charge them with grand theft, using the value of the pole prior to it being ripped from the ground. Anyone taking advantage of situations relating to Hurricane Irma will be prosecuted, as the residents of Florida are trying to recover from the storm.

Anyone charged with any type of theft offense should contact DMT and seek advice from the experienced criminal attorneys in our office.

Categories: Misdemeanors
681
Facebook Twitter LinkedIn Google+ Pinterest WhatsApp Email Copy Link Your browser does not support automatic copying, please select and copy the link in the text box, then paste it where you need it.
Don't Miss These Other Must Read Articles