Road Rage Incident in Miami-Dade Leads to Felony Assault Charges for Our Client. Could Our Attorneys Make a Jury See that There Was No Evidence?

1.04k
Facebook Twitter LinkedIn Google+ Pinterest WhatsApp Email Copy Link Your browser does not support automatic copying, please select and copy the link in the text box, then paste it where you need it. 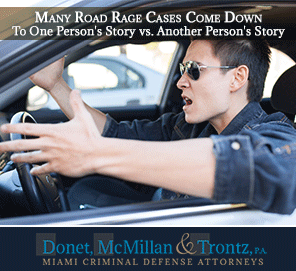 Living in Miami-Dade County, traffic and fast driving can get the best of even the calmest driver. However, many supposed road rage cases come down to one person's story vs. another person's story. In court, this usually ends up being the victim, or the person trying to press charges, and the defendant, the person against whom the charges are being filed. Recently, one of our clients was the defendant in a case brought to the State with a formidable victim who happened to be a federal agent with the Department of Homeland Security. He claimed that our client had pulled a firearm on him while driving, and the State wanted to press assault charges. This would not only ruin our client's career as a security guard, but lead to jail time. There was little evidence, but still the state refused to offer a decent plea bargain, so we had to take the case to trial and prove our client's case before a jury.

Driving to Miami on I-95

In this road rage case, the incident occurred on a Saturday afternoon in the southbound express lanes of I-95. The aforementioned victim, the federal agent, was travelling southbound in his Chevy Silverado. The agent claimed that our client, the defendant, approached his truck from the rear at a high rate of speed. For approximately 2 miles, our client allegedly tailgated the agent's car. He reportedly maintained a distance of approximately 3-4 feet from the agent's rear bumper.

The Victim's Claimed to See a Firearm Inside Our Client's Truck

Eventually, the traffic congestion permitted our client to change lanes and pull around and up to the driver's side of the agent's truck. The agent stated that he observed our client extend his arm over to the passenger window and point a black semi-automatic firearm at him. He went on to state that our client then turned his wrist so that he could clearly see the profile view of the firearm. According to the agent, our client then pointed the firearm at him again simulated a firing and recoil action of the firearm. The agent then reached for his firearm on the passenger seat of his truck and turned back to see our client accelerating away.

The agent claimed that he unsuccessfully tried to reach a 911 operator. Ultimately, he decided to pursue our client south on I-95 and then east on the MacArthur Causeway. On the causeway, the traffic became congested, thereby enabling the agent to exit his truck and approach our client's car while pointing his firearm at our client's car. Our client emerged from his car, unarmed. The Defendant was reportedly ranting and telling the Victim, "What are you going to do, shoot me?" And then, "Look, there is a Miami Beach Police Officer right there. You aren't going to do shit."

Our client then returned to his car and began to drive away. The agent maneuvered his truck over to a marked Miami Beach Police vehicle, where he presented his Homeland Security badge to the officer and told him that our client had pulled a gun on him. The Miami Beach officer then pulled over the defendant, without incident. Our client voluntarily consented to a search of his vehicle. He also voluntarily informed the officer that he was an armed security officer and that he had a firearm in the glove compartment of his vehicle. Although our client made no confession or admission to pointing a firearm at the agent, and no independent witness or evidence confirmed the accusations made by the agent, our client was arrested for Aggravated Assault with a Firearm. 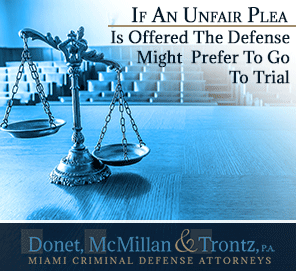 Our Client Was in a Tough Position

As a result of the pending charge, our client lost his job when his concealed weapons permit and his security clearance was revoked by the State of Florida. The evidence in the case amounted to no more than the agent's version of the event versus our client's version. Despite the obvious weaknesses in the case, the prosecutor refused to offer anything less than a 3-year minimum mandatory prison sentence.

We Recommended to Go to Trial

We felt strongly that this plea offer was unfair and not justified by the facts, evidence, and law in this matter. Donet, McMillan & Trontz therefore aggressively defended the case to the end. We did not want to settle and have the client be branded by a felony plea for the rest of his life. We were not willing to have our client accept any plea to a felony charge. We truly believed that the only fair, legal, and just result would have to come with a jury trial. Our client agreed, and we proceeded to trial.

How We Defended Against the Allegations

During this process, we poured over every detail of the incident. Since it was the agent's word against our client's, it was important to show the jury that there was insufficient evidence. First, we addressed the idea that the agent could have seen our client point a gun through the window of his car. To do so, we provided the State of Florida with photographs of the Defendant's car that were taken within days of the alleged incident. These photos clearly showed extremely dark, tinted windows on the Defendant's car. With this information, we took the position that the agent could not have seen what he thought he saw. We felt this argument was further bolstered by the fact that our Client is a Haitian American with a dark complexion, making it even more difficult to see exactly what our client was doing behind the tinted windows, across the passenger's seat, driving on I-95 where speeds often far exceed 70 mph. We concluded that, at most, the agent may have seen our client making finger gestures.

The jury recognized the lack of evidence in this case, and we were extremely happy when, at the conclusion of the trial, the jury returned a Not Guilty verdict in less than 20 minutes. Justice served!

If you find yourself in a difficult situation with the law, contact Donet, McMillan & Trontz at (305) 444-0030 to get a fair and dedicated defense.
Categories: Assault, Felonies
1.04k
Facebook Twitter LinkedIn Google+ Pinterest WhatsApp Email Copy Link Your browser does not support automatic copying, please select and copy the link in the text box, then paste it where you need it.
Don't Miss These Other Must Read Articles

DMT Featured on A&E: A Life-Altering Road Rage Case and a Stand Your Groun...
Michael R Cole 6 days ago

Good job on the road rage offense. I am retired LE (32 yrs) and could see the weakness in the case. I also own my own Private Investigation firm.