South Florida Man Charged with Grand Theft of a Maserati. Can a Skilled Miami Defense Lawyer Help Him Out?

907
Facebook Twitter LinkedIn Google+ Pinterest WhatsApp Email Copy Link Your browser does not support automatic copying, please select and copy the link in the text box, then paste it where you need it. 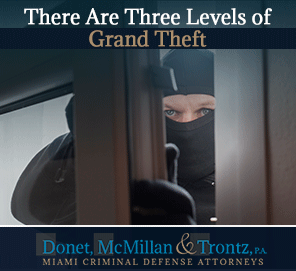 A South Florida man was arrested for allegedly stealing a $150,000 Maserati. The guy apparently has good taste, but the value of the vehicle could actually land him in state prison. According to local media, the defendant is facing a grand theft charge. The bond the defendant had to post along with the potential penalties largely depends on the filing decision by the state attorney's office. He definitely needs the help of Miami criminal defense attorneys  what kind of trouble is he looking at? There are different levels of grand theft and different categories depending on the value of the stolen property and the item or items that were taken without the owner's consent.

What Is Grand Theft?

Grand Theft of a Vehicle Can Be Complicated

There are also grand theft statutes that deal in specific items such as theft of a vehicle, theft of a firearm, theft of medical equipment, theft of law enforcement equipment, and theft of cargo. There are also grand theft statutes that deal with the elderly. The potential penalties (pre-trial diversion, probation, county jail, or state prison) largely depend on the items taken and/or the amount stolen from elderly. The defendant's fate in this case, assuming the state can prove the allegation, depends on how the case is charged. Grand theft of vehicle does not dictate any type of incarceration, but as stated earlier, if charged with grand theft in the first degree the code provides for state prison time of no less than 21 months. The charging decision is left up to the prosecution. However, the victim will have some input at the time of the pre-file conference. If the victim in this particular case desires that the defendant serve time for the offense, it is quite apparent how the state will charge the case. If the charge is increased from that listed on the arrest affidavit, the defendant can be taken into custody and be required to post a new, elevated bond to secure his release.

What Are the Defendant's Options? 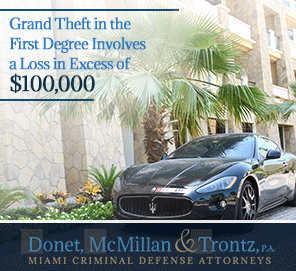 To this point, only the charging possibilities and potential penalties for grand theft have been discussed. The defendant in this case has pleaded not guilty, and the state has the burden of proving the case. Obviously, the vehicle was taken without the victim's permission, but can the state prove that the defendant took the sports car? The victim did not see who took the car, and based on the article, it does not appear that any of the valet personnel can establish who took the vehicle. It is quite possible that someone other than the man arrested in this case took it. On many occasions in Miami and in South Florida, individuals have taken keys from the valet desk and made off with someone else's vehicle.
How Can They Prove Who Took the Vehicle?

The best evidence either for or against the defendant in this case depends on the surveillance video. Any criminal attorney will demand to have the video turned over in discovery so it can be viewed by the lawyer and his client. The angle of the camera and the quality of the video will dictate whether the defendant should go to trial or resolve the case by way of plea bargaining. It will be interesting to see how the case plays out.

If you find yourself facing grand theft charges, you should contact an attorney right away. Call the experienced criminal defense lawyers at Donet, McMillan & Trontz at (305) 444-0030 today!
Categories: Theft Crimes
907
Facebook Twitter LinkedIn Google+ Pinterest WhatsApp Email Copy Link Your browser does not support automatic copying, please select and copy the link in the text box, then paste it where you need it.
Don't Miss These Other Must Read Articles