Cold Case in Coral Gables: Can This Violent Crime Charge Be Proven Beyond a Reasonable Doubt after 40 Years?

1.6k
Facebook Twitter LinkedIn Google+ Pinterest WhatsApp Email Copy Link Your browser does not support automatic copying, please select and copy the link in the text box, then paste it where you need it. 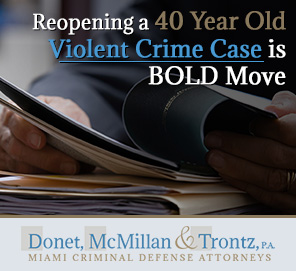 In 1977, a nurse was murdered in her Coral Gables apartment. Her boyfriend, whose apartment she lived in, was suspected at the time, questioned, and never charged with the violent crime. Recently, the case was reopened on the basis of forensics collected at the time linking the defendant, Mr. Bregman, to the apartment that he owned. Technology has improved substantially in 40 years, but is it enough to make a conviction?

Reopening a case after 40 years is a bold move, and usually done on the basis of solid evidence. When this case went cold back in 1977, there was no such thing as crime lab results or DNA evidence. Fingerprinting was the height of forensics technology, and DNA fingerprinting wouldn't be around for another seven years. However, based on what we've read in the Miami Herald, there doesn't seem to be much evidence that could not be easily dismissed.

The defendant in this case was arrested in August 2, 2016. He is currently charged with second degree murder with a deadly weapon. As this offense is a first degree felony punishable up to life in prison, he is being held currently with no bond. Although facing serious charges, Mr. Bregman is represented by a very experienced Miami criminal attorney. The case is set for August 17th for an Arthur Hearing.

In order for the state to hold the defendant without out a bond, they must satisfy the presiding judge of two things. First, the state must show that there is proof evident and presumption great, which is a very high burden to overcome. If the state can convince the judge that there is proof evidence, presumption great, the state must also convince the judge that either the defendant is a danger to the community or a risk of flight. If the state does not get beyond the first hurdle, the judge will set a bond. The amount of the bond that is set is within the discretion of the judge. If the state can meet its first burden of proof, but cannot meet the second, then the judge will also set a bond. Again, the amount of the bond is within the court's discretion. 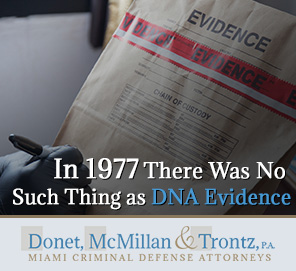 In an Arthur hearing, the burden of proof for both prongs is in the prosecution authority. The state will generally call the lead detective to explain the evidence that exists against the defendant. In cases where a victim exists, the state can provide evidence in the form of an affidavit. As the victim is deceased in this case, the state will, more likely than not, call the medical examiner to testify as to the cause of death. However, being that the murder occurred in 1977, the state will call a substitute medical examiner to relay the information and evidence discovered by the original medical examiner who investigated the homicide. While not knowing all of the facts of the case, the state appears to be relying on physical evidence discovered at the crime scene and on the victim's person. While in most cases where the defendant and the victim had no previous connection, this evidence is usually very favorable to the state. However, in this case, the defendant owned the apartment, stayed there frequently, and had a relationship with the victim. It certainly explains why the defendant's fingerprints were found in the apartment and why a hair belonging to the defendant on the victim's arm.

The state will use circumstantial evidence to support the physical evidence in the case, first to hold Bregman without a bond, and secondly to put him in jail for the rest of or at least the better part of the rest of his life. The circumstantial evidence was obtained as a result of a search warrant. First, there was no forced break-in. The state will argue that the defendant must have committed the crime as he had a key to the apartment. If defending the case, we would argue that the state could not prove that the victim had a proclivity for either keeping her door locked or unlocked. It is unlikely that the state can prove whether the homicide occurred during the day or a night as the body was decomposing when it was discovered. We would further argue that many people keep their door locked during the day and murder could have been committed by a random passerby or a jealous boyfriend. This argument would certainly go a long way to convincing the judge that the state did not meet its burden of presumption of proof evident, presumption great, and certainly could not prove to a jury that the defendant was guilty beyond a reasonable doubt.

The state is going to argue that the defendant's fingerprint was found on an ashtray in the apartment and that the item was used to bludgeon her to death. There are a thousand explanations why his fingerprint was on the ashtray and absolutely no evidence that he used it to kill the victim. Again, the murder could have been committed by a passerby or another boyfriend. The fact that the defendant attempted to collect on a life insurance policy is another piece of circumstantial evidence that the state is going to rely on in prosecuting the case. Why wouldn't a beneficiary try to collect on a life insurance policy that he was entitled to? The fact that the defendant had previously invoked his right to remain silent is inadmissible and therefore cannot be used by the state as evidence.

While the state is apparently set on prosecuting the defendant, they have a long road ahead. However, the jury will hear the violent nature of the crime and will certainly have sympathy for the next of kin. It will be interesting how this cold case plays out over the upcoming months.

Source: Miami Herald
Categories: Murder
1.6k
Facebook Twitter LinkedIn Google+ Pinterest WhatsApp Email Copy Link Your browser does not support automatic copying, please select and copy the link in the text box, then paste it where you need it.
Don't Miss These Other Must Read Articles