COP App Is Here: Will This Anonymous Tip System Lead to Good Convictions for Miami-Dade?

784
Facebook Twitter LinkedIn Google+ Pinterest WhatsApp Email Copy Link Your browser does not support automatic copying, please select and copy the link in the text box, then paste it where you need it. 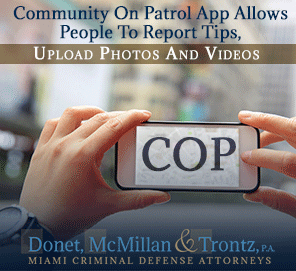 Miami-Dade recently released a mobile application that is supposed to help people in the area report crime anonymously. The app is called "Community on Patrol", or COP for short. The system allows people to report tips, upload photos, upload videos, and send it over to Miami-Dade's Real Time Crime Center. A detective will review the tip and determine if police should be dispatched. While this may seem like new technology, the history of anonymous tip lines is a challenging one, and it can often lead to innocent people being imprisoned.

While the "Community on Patrol" App may seem like an efficient way for the public to interact with police, pitfalls may exist with the implementation of this new system. If the application is used properly and the police use the information they receive, it could be used as an effective tool to fight crime. Photos or videos taken could assist law enforcements officials by providing leads to solve crimes. The biggest problem that the criminal lawyers at DMT foresee for Florida Criminal law with the application, is that witnesses to offenses can remain anonymous. Tips left by anonymous callers can sometimes lead to the arrests of innocent people. Unwarranted arrests can arise simply by anonymous callers mistakenly calling in descriptions that are not accurate, especially when there are no photos or videos to back up their identification of alleged perpetrators. While it is hard to believe, individuals can call in anonymous tips claiming that they know the alleged perpetrator, when these individuals are seeking to get a person arrested for personal reasons and in fact, the person had nothing to do with the crime. This can lead to a false conviction, and while Post Conviction Relief can lead to later motions to set-aside for those people, they can never get back the time spent, reputation damage, and freedom lost.

Burglary Case Arrest Made Based on an Anonymous Tip

The criminal attorneys at DMT are currently representing a defendant in Broward County on Burglary charges. Our client, along with another individual, is accused of tricking an elderly woman to allow them into her home. The individuals wore hard hats and reflective vests and told the elderly female victim that they were employees of the Broward County Water and Sewage Department. One of the individuals knocked on the door and gained access to the residence by telling the elderly victim that they were there to check on water pressure problems in the area and sent there to fix the situation. The victim allowed the first individual into the apartment. The front door was left open, allowing the second individual into the residence. A neighbor across the street witnessed the events and became concerned about the elderly woman. The neighbor took a picture of a car in the driveway (a Mercedes), being suspicious that the individuals posing as water and sewage workers would drive such an automobile. The picture captured the license plate on the vehicle. The neighbor crossed the street and entered the residence. He observed the victim with one of the individuals in the back of the house looking out the window. While speaking to the victim, a second individual exited the victim's bedroom. According to the neighbor, he got a good look at both individuals. After being asked for their identification badges, both individuals ran out of the house and left the scene.

Investigators took statements from the elderly woman and the neighbor. The police located the name of individual to whom the Mercedes was registered. The next day, investigators responded to the victim, who could not identify anyone out of a six-photo lineup. One of the photos in the lineup belonged to the owner of the Mercedes. While the victim could not pick out the individual out of the lineup, the neighbor could, and the first individual was tracked down and arrested. For about a month, investigators were unable to track down the second individual. However, a purported enemy our client called in an anonymous tip accusing him of being the second individual involved in the burglary. Investigators located our client's photo on the driver's license data base. They created a six-photo array and returned to the victim and neighbor. Again, the victim could not identify our client, but the neighbor positively identified our client as the individual who exited the victim's bedroom. There is not one single shred of physical evidence linking our client to the crime.

Anonymous Tips Are Not the Same as Evidence

It is difficult to say how the neighbor could pick out our client. He viewed these photos after 30 days had passed, and only had an instant to see the second perpetrator in the house. That coupled with the fact that the second individual was wearing a hard hat, which covered a good portion of his head, makes it difficult to guarantee that the neighbor made a correct ID of the actual second burglar. Meanwhile, our client is facing a significant amount of prison time if convicted by a jury. While we will be able to cross examine the neighbor at trial, we will never know who the individual was who provided the anonymous tip. Our lawyers will never be able to inquire as to how this information was obtained or who provided it. So, one can see how an anonymous tip could very easily lead to an innocent person being incarcerated. 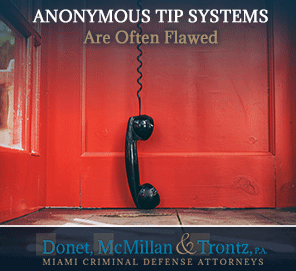 The news is replete with individuals who are charged, convicted of crimes, and sent to prison solely based on an identification by one person, only later to be exonerated through DNA evidence after serving many years in prison. While anonymous tips are often used to eventually to solve crimes, there is a clear danger because these tips cannot be substantiated by law enforcement. The identification process is often flawed, and without some indirect physical evidence such as DNA or fingerprints, there is a chance that a truly innocent prison could end up in prison. If you're facing charges based on an anonymous tip, you need to get legal representation to help you divert those charges. Contact Donet, McMillan & Trontz at (305) 444-0030 to learn more.

Categories: In General
784
Facebook Twitter LinkedIn Google+ Pinterest WhatsApp Email Copy Link Your browser does not support automatic copying, please select and copy the link in the text box, then paste it where you need it.
Don't Miss These Other Must Read Articles