Criminal Convicted of First Degree Murder in Florida Court with Only Circumstantial Evidence. How Did They Get the Charges to Stick?

1.36k
Facebook Twitter LinkedIn Google+ Pinterest WhatsApp Email Copy Link Your browser does not support automatic copying, please select and copy the link in the text box, then paste it where you need it.

Homicide cases, like all cases, can be prosecuted solely based on circumstantial evidence. As former prosecutors, the Miami criminal lawyers at DMT, P.A. can tell you that direct physical evidence is sometimes preferred when trying to prove a case; however, circumstantial evidence can be just as compelling to a jury. At the end of the day, a defendant's fate is not determined by whether direct or circumstantial evidence was used, but on the quality of the type of evidence used. As such, it is increasingly important to understand all the charges and evidence being used against you if you are being investigated by Florida criminal law enforcement.

Murder in the Everglades

A case recently appeared in the news about a man who was swiftly convicted by a jury that deliberated for just two hours. The man had been suspected for the murder of his former wife, but it was not until the SUV containing her body, the murder weapon, and his glasses, was dredged from the everglades that the state could make a case against him. 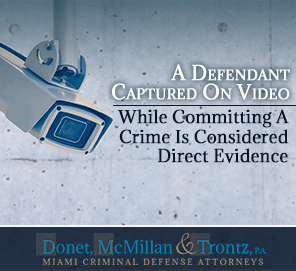 In this case, state prosecutors used solely circumstantial evidence to procure a conviction for first degree murder. The evidence presented to the jury was as follows:

1. An estranged wife that filed for divorce,
2. The defendant was a violent stalker,
3. The defendant went to her place of employment hours before the homicide occurred,
4. Her call to her new boyfriend was cut short,
5. Cell phone records placed the defendant with her prior to homicide and in the area where her vehicle was recovered,
6. The vehicle was submerged in a canal with the transmission in neutral,
7. His glasses were found in the car, and
8. The defendant's father told police that he picked his son up at a gas near the location of the submerged SUV.

While none of the facts alone would have supported a conviction, altogether, they inferred that the defendant murdered the victim.

How Can Types of Evidence Make a Difference?

What Is Direct Evidence?

What Is Indirect Evidence, or Circumstantial Evidence? 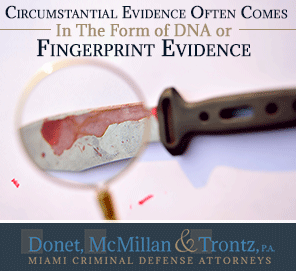 How Do These Cases Get Resolved?

How and when a case is resolved always depends on the strength of the direct, scientific and/or circumstantial evidence collected by investigators. When the state or the government has compelling evidence, cases are often resolved as a result of plea bargaining, as the defense has a slim chance of prevailing if this evidence is presented to a jury. However, in very serious cases with very strong evidence, defendants may choose to allow a jury to determine their fate, as the plea offer is so high that the defendant would rather take his or her chances at trial rather than walk into to prison for 30 plus years. After all, the state or the government has the burden of proving that the defendant is guilty beyond a reasonable doubt. The downside is that the prosecutors handling the most serious of cases having potentially long prison sentences are the most experienced and know exactly how to put a case a case together and how to present it to a jury.

If you're being charged with a crime or trying to get a plea bargain and reduced sentence, it's important to have an experienced criminal defense lawyer on your side. Contact Donet, McMillan & Trontz at (305) 444-0030 for a consultation today.

Miami Herald
Categories: Murder
1.36k
Facebook Twitter LinkedIn Google+ Pinterest WhatsApp Email Copy Link Your browser does not support automatic copying, please select and copy the link in the text box, then paste it where you need it.
Don't Miss These Other Must Read Articles