1k
Facebook Twitter LinkedIn Google+ Pinterest WhatsApp Email Copy Link Your browser does not support automatic copying, please select and copy the link in the text box, then paste it where you need it. 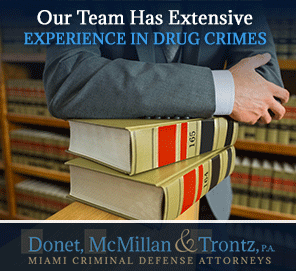 Our team has extensive experience in drug crimes  especially those related to grow houses and marijuana trafficking. Our recent case was a complex and interesting one. Investigators made a quick arrest that we proved to be unlawful, and the investigation and allegations against our client could have led to 70 months in state prison! Discover how our Miami criminal lawyers were able to turn this scare into a success.

How Did the Police Find the Defendant's Illegal Grow Operation?

Florida police first heard about our defendant through an anonymous tip. The tip said that there was a grow house at his residence. Anonymous tips can be delivered a few different ways: defendants who have been arrested for other drug crimes might try to get a deal by exchanging information with law enforcement, or they may be made by neighbors or competitors to anonymous tip lines, or criminal informants might provide information to their handlers in an attempt to keep themselves safe from the law.

The Police Investigate the Tip:

The police went to our client's residence to investigate. As soon as they arrived, our client pulled into the driveway. The police immediately forced him to leave his vehicle, and then they handcuffed him. While one police officer monitored him, other officers approached the house and began knocking on the door. This is a procedure called "knock and announce". The investigators first knock on the door and hope that someone will answer. If someone does answer the door, the hope is that the scent of cannabis will escape the residence through the open door and law enforcement will have probable cause to perform a search.

The homeowner answered the door, and the detectives could smell the uncut cannabis from the plants inside. They asked the homeowner if they could search the home, and the homeowner said yes. The detectives discovered a fully operational hydroponics lab. The homeowner was then cuffed and joined our client in the back seat of a police vehicle. Both defendants were recorded while seated in the back of the police car. They discussed the grow house, and subsequently were both arrested and charged for trafficking in marijuana and owning/possessing a place for the purpose of growing marijuana.

To post bail for a drug crime charge, defendants must satisfy the Nebbia requirement. What this means is, defendants must prove to both the judge and the state that all money used for the bond premium AND the collateral for the bond must come from legitimate sources. As soon as the bond was posted, our client called Donet, McMillan & Trontz to investigate the case and defend him against the scary trafficking charges. 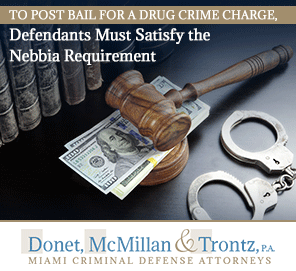 Our team of expert drug crime lawyers fervently reviewed the discovery. Then, we took the depositions of the arresting officers. Our team has thorough experience and knowledge of search and seizure laws, so they are well-equipped to handle these kinds of investigations. Once a thorough review of discovery and depositions was complete and we performed extensive research on the subject matter, our team determined that the best step would be to file a comprehensive motion to suppress the stop and arrest of our client.

It took many hours of testimony as we filed our motion to suppress. The judge heard arguments from both the defendant's attorneys (DMT) and the state's prosecutors. Finally, the judge granted our motion. Once the motion was granted, that meant that all the evidence that had been gathered from the home, all of the recordings from the back seat of the police car, and anything told to the police after the arrest was suppressed and could not be used against our client.

The state had zero evidence to prosecute! All the charges against our client were dismissed. Our client had been facing 70 months in state prison, and now he was able to exit the courthouse of his own volition, with no threat of further prosecution.

Have you or someone you know been arrested for a drug crime? Contact our qualified attorneys at (305) 444-0030 to stay prepared for your case.
Categories: Drug Offenses
1k
Facebook Twitter LinkedIn Google+ Pinterest WhatsApp Email Copy Link Your browser does not support automatic copying, please select and copy the link in the text box, then paste it where you need it.
Don't Miss These Other Must Read Articles