1.27k
Facebook Twitter LinkedIn Google+ Pinterest WhatsApp Email Copy Link Your browser does not support automatic copying, please select and copy the link in the text box, then paste it where you need it. 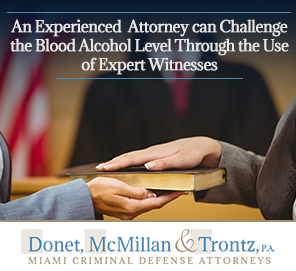 Florida police recently arrested a Pembroke Pines man more than a year after a fatal crash that left his wife and two of her young children dead. The arrest warrant alleged that on April 24, 2016, Trevor Nicholas Carter-Remy lost control of the vehicle he was operating on Interstate 75. The vehicle flipped over multiple times, ejecting six out of the eight occupants. Allegedly, none of the passengers in the vehicle were wearing seatbelts. The man was arrested on multiple counts of DUI manslaughter, vehicular homicide, and DUI causing serious bodily injury. As experienced Miami criminal defense lawyers, we'd like to clear up some of the confusing information behind this case and explain the grey areas in serious allegations like this one.

One of the common questions raised from a series of events like this one has to do with the timeline. It took the state over a year to arrest and charge the defendant. Why?

It is not uncommon for the state to bring charges of this nature several months after the accident occurs. The criminal defense lawyers at DMT have seen on this on several occasions. It is typical to allow investigators as much time as they need to obtain the results of any blood alcohol testing. Blood alcohol testing may have been withdrawn by consent, by force, or by the hospital if the driver was admitted because of the crash.

Another probable delay in filing charges in a DUI manslaughter case could be the time it takes to complete the accident reconstruction investigation and the compilation of the final report.

Another possibility is that investigators needed to do DNA testing to put the defendant behind the wheel at the time of the crash. Carter-Remy is alleged to have had a blood alcohol level of .014 hours after the crash. Two of the children that survived the crash gave statements to investigators. Bond was set extraordinarily high, at $1,100,000 by the court.

To prove the crime of Driving Under the Influence Manslaughter, the state must prove three elements beyond a reasonable doubt.

First, they must prove that the Defendant drove or was in actual physical control of a vehicle. When the troopers arrived on the scene, we can assume that Carter-Remy was not behind the wheel because he was ejected. Even though the defendant may have not been behind the wheel of the car, there are numerous other ways to prove actual physical control.

How Can the State Prove Who Drove the Car?

If Carter-Remy was ejected from the vehicle at the time of the crash, it will take either eyewitness testimony or forensics to prove that he was operating the vehicle. The state may try to use the survivors of the crash to put him behind the wheel or could look for witnesses that observed him driving just prior to the crash. Independent eyewitnesses would have a difficult time identifying the driver when the car was traveling at 80 miles an hour and flipped over several times.
The state can use blood evidence obtained from the driver's side airbag, dashboard, or steering wheel to prove that an individual was operating the vehicle through DNA testing. Of course, without reviewing the arrest warrant, these are all viable possibilities.

Secondly, the state must prove that at the time of the crash, the driver was under the influence of alcohol or had a breath or blood alcohol level in excess of .08. The warrant established that blood alcohol level was a .014, which is almost twice the legal limit. The blood that was tested was drawn from the defendant several hours after the accident.

A qualified and experienced defense attorney can challenge the blood alcohol level through the use of expert witnesses. On many occasions, a qualified expert will have enough information to testify that the driver's blood alcohol could been below a .08 at the time the crash based on several variables. An expert could also testify that the method used for drawing and/or storing the blood was flawed or even that the protocol used by the lab to test the blood was indeed flawed.

Proving the Driver Caused the Accident

Third, the state must prove that the driver was the cause or contributed to the deaths of those involved. It is possible to defend against the DUI manslaughter charge if a defense lawyer can prove that there was an intervening or interceding event that caused the crash. In this case, there is some evidence that the wife was striking the driver while he was operating the vehicle and may in fact have even grabbed the wheel, causing the crash. If the defense can provide some evidence that this occurred, the state may have to re-think their case and could even wind-up amending the charges.

All of the defenses and possible options will have to presented during the discovery process. If none of these defenses hold water, the defendant in this particular case could be looking at serving years in prison.

Serious charges do not always result in prison sentences. Contact Donet, McMillan & Trontz at (305) 444-0030 to have your case examined by experienced Florida criminal defense lawyers.

References:
Local 10 News
Categories: DUI, DUI Manslaughter
1.27k
Facebook Twitter LinkedIn Google+ Pinterest WhatsApp Email Copy Link Your browser does not support automatic copying, please select and copy the link in the text box, then paste it where you need it.
Don't Miss These Other Must Read Articles