1.33k
Facebook Twitter LinkedIn Google+ Pinterest WhatsApp Email Copy Link Your browser does not support automatic copying, please select and copy the link in the text box, then paste it where you need it. 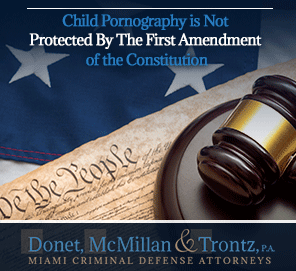 A Port St. Lucie man was arrested for and charged with ten counts of possession of child pornography. David Ashley was arrested by the St. Lucie County Sheriff's Office, but has since posted a $100,000 bond. While the bond seems high, a bondsman will only require that a defendant pay 10% of the total bond. However, the $10,000 or 10% will not be refundable from the bondsman. This is one example of how the State and Federal Courts may prosecute possession of child pornography. As Miami criminal defense lawyers, we are often faced with challenging cases like this one.

Google became aware that child pornography files had been downloaded through their server and notified the National Center for Missing and Exploited Children. The Center investigated the matter and determined in fact that child pornography had, in fact, been downloaded and notified the South Florida Crimes Against Children Task Force. The task force was able to determine which computer was used to download the images by tracking the IP address. St. Lucie detectives subpoenaed the Comcast records relating to that particular IP address. The police obtained a search warrant for the address that was linked to the Comcast account. With the warrant in hand, the detectives entered the residence and seized computer equipment. A forensic search of the computer revealed at least ten child pornography images and/or videos.

Like State Law, there are Federal Statutes prohibiting the production, distribution and possession of child pornographic images. The Federal Sentencing Guidelines allow for sentencing enhancements if the government can prove that the images contain child under the age of 12 or can show that the images depicted sadistic or masochistic images. Under Federal Law, each count of mere possession of an image carries a 5-year prison sentence that can also be stacked for each image. Production or distribution of child pornography carries a 15-year sentence for each count. 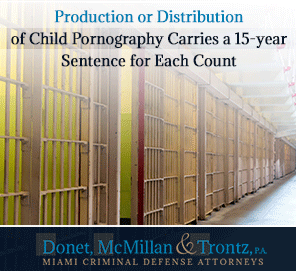 Arrests for possession of child pornography usually occur as a result of law enforcement agencies becoming aware that child pornography is being downloaded to a particular IP address. Both state and federal law enforcement agencies have many computer related tools to allow them to discover the downloading of child pornography. Once they have an IP address, they can contact the internet provider and locate the billing address where the computer is being used. With that information in hand, detectives will appear at the residence with a search warrant allowing them to seize all computers located at that address.

Usually, more than one person lives at any particular address, which makes it difficult to determine who is ultimately responsible for the downloading of the images. After the warrant is executed, the police will forensically look into each computer device seized. If child pornography is recovered from a computer, law enforcement will return to the address where the computer was seized and attempt to speak with any suspects. Of course, Miranda warnings must be provided to anyone being questioned in regards to the investigation.

The most important thing any suspect can do is invoke his or her right to remain silent and consult with a Miami criminal lawyer. Any admission to the possession or downloading of child pornography coupled with computer forensic evidence will lead to an arrest and prosecution. Without statements admitting to the downloading of child pornography, it will sometimes make it difficult for the state or the feds to prove which individual at the residence is actually responsible.

Anyone who is being investigating for or charged with passion or production of child pornography should contact the DMT as soon as possible so your rights are protected. The earlier an attorney is contacted, the more defensible the case will be. Remember, there are defenses to child pornography charges. Knowledge is an essential element. A lack of knowledge is a viable defense. Speaking to law enforcement may remove that defense, so always invoke your rights. Contact Donet, McMillan & Trontz at (305) 444-0030 for more information, today.
Categories: Felonies, Internet Crimes
1.33k
Facebook Twitter LinkedIn Google+ Pinterest WhatsApp Email Copy Link Your browser does not support automatic copying, please select and copy the link in the text box, then paste it where you need it.
Don't Miss These Other Must Read Articles