How Do Police Investigate a Grow House, and Other Marijuana Trafficking Drug Crimes, in Miami?

8.56k
Facebook Twitter LinkedIn Google+ Pinterest WhatsApp Email Copy Link Your browser does not support automatic copying, please select and copy the link in the text box, then paste it where you need it. 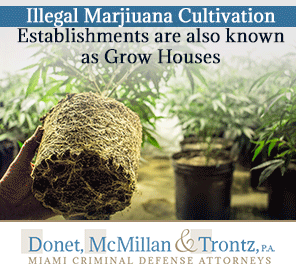 At Donet, McMillan & Trontz P.A, we have years of experience defending clients charged with operating or maintaining illegal marijuana cultivation establishments, otherwise known as grow houses or hydroponic labs. In this situation, most of our clients are charged with trafficking in marijuana/cannabis and/or owning or maintaining a residence for the purpose of cultivating marijuana. While trafficking in cannabis carries the lowest minimum mandatory sentence (3 years) of all trafficking offenses, it is certainly serious enough to land a person in prison or jail.

Over the years of defending these types of cases, rarely do we see anything of a nature we have not seen before in the area of criminal defense. Donet, McMillan & Trontz has defended marijuana trafficking in numerous counties across the State of Florida. The results of each case depend on many factors, such as the jurisdiction where the offense occurs, the amount of cannabis recovered from the home, a client's prior criminal history, and the method of search and seizure conducted by law enforcement authorities. Our Miami drug crime lawyers have obtained numerous dismissals and probationary plea offers, which are the result of zealous representation, dedication, and a complete understanding of the search and seizure laws in the State of Florida.

How Are Grow Houses Discovered?

Ninety percent of the grow houses discovered by law enforcement are the result of tips. The tips can be anonymous or, as in most cases, usually provided by defendants who have been arrested for similar or other types of drug offenses. These defendants provide information in an effort to reduce their exposure in the criminal justice system. In most scenarios, the defendants report information regarding operational grow houses to their handlers. The handlers report the information to narcotics squads who will follow up on these tips. Tips provided by anonymous sources or defendants trying to solve their own problems usually do not provide enough fresh and detailed information to establish probable cause, thereby preventing law enforcement from obtaining search warrants at the onset of the investigation. Even armed with enough information, detectives will often try to avoid obtaining a warrant because they require a good deal of work and require a judge's signature to make them enforceable.

What Can Police Do Without a Warrant? 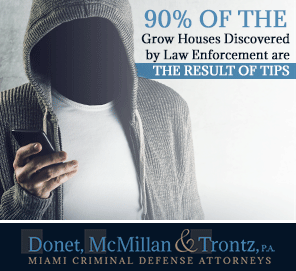 Without a warrant, a narcotics squad will appear at a residence based on some form of tip. The detectives will look for a few clues to determine if they are, in fact, investigating a grow house. They will look for evidence of a power diversion from the power lines, as the grow houses need a lot of electricity to be successful. To prevent FPL from discovering the inordinate amount of power being used, grow house operators will usually divert the power before it reaches the meter. Detectives will listen for constantly running air conditioning units and look to see if the windows are covered. Most importantly, the detectives will try to discover the smell of raw cannabis. The police are permitted to approach the front of the house and knock on the front door. The only way to prevent this sort of police access is to surround a home with a fence and a gate securing the front of the evidence. The police have no right to enter a property as long as the fence surrounds the property and the gate is closed (even better if the gate is locked). Law enforcement is also free to use a neighbor's yard to get a view of the sides and the rear of the home being operating as a lab.

Assuming there is no fence, law enforcement will approach the front door and follow a procedure called "knock and announce". They knock on the door, hoping someone inside will answer. Answering the door in most instances, allows the smell of marijuana to escape from the home. At this point, law enforcement will ask for consent to search the residence. It is everyone's constitutional right not to consent to the search of his or her residence. If consent is denied, detectives will have no other choice but to draft a warrant and attempt to have it signed by a judge. In most cases, if the detectives have made it to the door and found clues that suggest it is an operational grow house, a warrant will be signed by a judge. In all circumstances, it is better to refuse to consent and force the police to obtain a warrant. The validity of the warrant can be attacked in court at later date. In a few instances, the police may improperly obtain consent. Consent must be completely voluntary. We have defended several cases where consent was obtained, but only by threatening the defendant with the arrest of the wife and referral to DCF (Florida Department of Children and Families) for the children. For obvious reasons, this consent is not valid as it must be freely and voluntarily given. 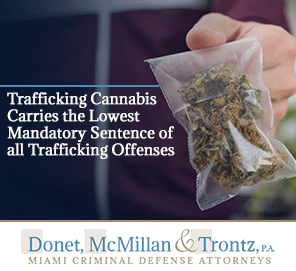 Our latest case was very interesting. The police received an anonymous tip regarding a grow house. While approaching the residence to conduct their investigation, our client pulled into the driveway. The police forced him from the vehicle and handcuffed him. Other officers approached the residence and knocked on the door. The homeowner answered the door. The detectives smelled the uncut marijuana. The police obtained a consent to search the residence, where a fully operational hydroponics lab was discovered. The homeowner and our client were both cuffed and placed in the rear of a police vehicle. Unknown to them, the police were recording their conversation which obviously contained discussions about the grow house. Our client and the homeowner were both arrested for trafficking in marijuana and owning or possessing a place for the purpose of growing marijuana. Both defendants posted bail after satisfying the "Nebbia" requirement. The Nebbia requirement is applied to all narcotics cases, where the defendants must prove to the judge and the state that the proceeds used for the bond premium and collateral come from legitimate sources.

How Could Our Team Help This Defendant?

After posting the bond, our client retained us to defend his case. We vehemently reviewed the discovery and took the depositions of the arresting officers. Based on our extensive knowledge of the search and seizure laws, our attorneys knew exactly the questions to ask. After reviewing the discovery and the deposition transcripts, we did exhaustive research and filed a comprehensive motion to suppress the stop and arrest of our client. After several hours of testimony at a motion to suppress, and after hearing arguments from both sides, the judge granted our motion. Upon the granting of the motion, all of the evidence recovered from the home as well as the taped conversation were not permitted to be used against our client.

With no evidence the prosecute, the state dismissed all charges against our client. He went from facing 70 months in state prison to walking out of the courthouse a free man. Donet, McMillan & Trontz's experience and tenacity allowed our client to return to his family without threat from further prosecution of his case. Contact our experienced attorneys at (305) 444-0030 to get a strong defense for your case.
Categories: Drug Offenses
8.56k
Facebook Twitter LinkedIn Google+ Pinterest WhatsApp Email Copy Link Your browser does not support automatic copying, please select and copy the link in the text box, then paste it where you need it.
Don't Miss These Other Must Read Articles