Is the Florida Stand Your Ground Law A Good Defense For This Road Rage Shooter? Ask a Miami Criminal Defense Attorney

970
Facebook Twitter LinkedIn Google+ Pinterest WhatsApp Email Copy Link Your browser does not support automatic copying, please select and copy the link in the text box, then paste it where you need it. 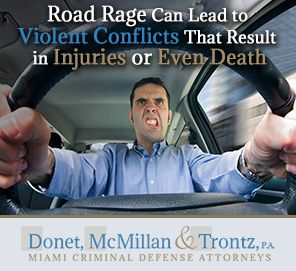 We recently read about an interesting case on NBC News. A man who had been previously convicted for manslaughter in a road rage incident was killed in a similar road rage incident in which, according to the article, he attempted to instigate a violent conflict with another driver. The old adage of "what goes around, comes around" certainly applies to the facts of this case, which make for some interesting insight into Florida's "Stand Your Ground" law and how the court system would potentially treat an incident like this one. As experienced Miami criminal defense attorneys, we can see a few different ways this case could go, should an arrest be made.

The Facts of the Case

The man who was killed in this case, Durham, had been charged and convicted of manslaughter in a 2001 road rage incident. Durham apparently did not learn his lesson after spending 11 years in a Florida state prison. However, this time he got the worst of it when he was killed by another motorist in Hillsborough County, Florida. According to the article, both men were going back and forth to the point that the shooter tried to disengage from the confrontation. Durham apparently reengaged the shooter, which led to his death. Padgett, the shooter, has not been arrested pending an investigation that is being conducted by the Hillsborough County Sheriff's Office.

What Happens After an Investigation?

Once the police conclude their investigation, they will undoubtedly meet with prosecutors to determine if Padgett acted in self-defense under the current state of the law. Prosecutors will pour over statements collected by eyewitnesses at the scene if any were present at the time of shooting. It is unclear if Padgett provided a statement to investigators. The smart move would have been to exercise his Miranda rights and seek out a zealous and experienced criminal defense lawyer to set his defense in place prior to dealing with the police. Without the advice of a lawyer, Padgett may have possibly implicated himself by inadvertently saying the wrong thing to investigators. It would have been prudent for him to have an understanding of the "Stand Your Ground Law", which was enacted by the Florida Legislature in 2005, prior to speaking with the authorities

Will "Stand Your Ground" Protect the Shooter?

The "Stand Your Ground" Law will protect Padgett if he can show that he was not engaged in an unlawful activity and was attacked in any place that he had a lawful right to be. Padgett had no duty to retreat and had the right to stand his ground, meet force with force, including deadly force, if he reasonably believed that deadly force was necessary to prevent death or great bodily harm to himself. It would be hard to believe that Padgett knew of Durham's previous conviction for the road rage manslaughter case. However, in the unlikely event that Padgett knew of Durham's past, it would certainly be an excellent fact in setting up a "Stand Your Ground" defense. Other factors that need to be considered will be what Durham said to Padgett prior to the shooting, Durham's demeanor toward Padgett just prior to the shooting, and the proximity of Durham to Padgett just prior to the shooting. The state will look at all of the facts and determine if Padgett had the right to use deadly force in this situation.

What If "Stand Your Ground" Doesn't Work?

If the state does not believe Padgett had the right to "stand his ground", manslaughter charges will probably be filed against him. Even if charges are filed, Padgett's criminal attorney can file a Motion to Dismiss the case based on the "Stand Your Ground" law. Both the state and the defense will call witnesses to allow the court to determine if Padgett acted within the bounds of the law. Once the defense receives the initial discovery, depositions or statements of the witnesses should be taken by the defense to determine which witnesses are favorable to the state or the defense. The deposition of the medical examiner should be taken to determine if there is any favorable evidence for the defense. An experienced defense lawyer would want to know if stippling or burns surrounded the entry wound. That would give an indication of the proximity of Durham to Padgett at the time of the shooting.

How Does Durham's History Influence the Facts of the Case?

After taking testimony and examining any relevant physical evidence, the judge will determine whether or not Padgett should stand trial. The state's biggest problem is that they have a very unsympathetic victim in the case. Even in the event the judge does not dismiss the case, the state will have an uphill battle convincing a jury that the deceased did not deserve what he got in the end. If Padgett is convicted of the crime of manslaughter, he will be facing 15 years in prison, as manslaughter is a second degree felony.

In light of Durham's past, Padgett would likely avoid the maximum sentence as long as he has no prior criminal record. His lawyer would file a complete mitigation packet to assist the judge in determining an appropriate sentence. In the event the state does not buy the theory of self-defense, but is aware of the problems with the case, they may very well offer a plea to a reduced charge that does not involve jail or prison.

What Would Be the Best Outcome for This Defendant? 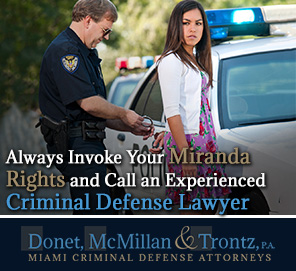 A positive outcome for Padgett would be if the state decides not to file charges. If the facts do not merit a "Stand Your Ground Defense", avoiding incarceration would be a win for Padgett. In the event Padgett is arrested, he could be charged with manslaughter. He will be able to post a bond and remain out of custody during the pendency of his case, as manslaughter is a bondable offense. Hopefully Padgett hired a lawyer prior to speaking with investigators. Always invoke your Miranda right and then get the advice of a good criminal defense lawyer. It could mean the difference between going free and being locked up.

Donet, McMillan & Trontz is currently representing a client charged with second degree murder. We are basing our defense on the "Stand Your Ground" law. The case is currently set for trial in October. If you are being arrested or interviewed by the police, always invoke your Miranda rights. Contact us at (305) 444-0030 to consult with one of our highly experienced attorneys.

Categories: Criminal Defense
970
Facebook Twitter LinkedIn Google+ Pinterest WhatsApp Email Copy Link Your browser does not support automatic copying, please select and copy the link in the text box, then paste it where you need it.
Don't Miss These Other Must Read Articles