Miami-Dade County Pursued the Maximum Sentence Against Our Client. Find Out How an Experienced DUI Defense Lawyer Got All His Charges Dismissed.

1.02k
Facebook Twitter LinkedIn Google+ Pinterest WhatsApp Email Copy Link Your browser does not support automatic copying, please select and copy the link in the text box, then paste it where you need it. 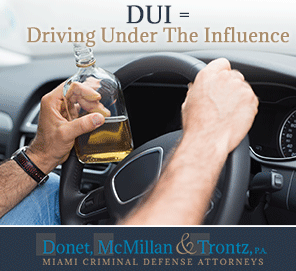 There are few concepts scarier than the state seeking a maximum prison sentence against you. Our client was facing this Misdemeanor DUI and drug possession charges after a serious car accident occurred in Miami-Dade County. Our client had spoken to police after the accident, but he was not read his Miranda rights or informed that he was being investigated for a crime. The State of Florida alleged that our client operated a motor vehicle in a reckless manner. By reckless, in this case, they alleged that he drove a vehicle after drinking alcohol and that he exceeded the speed limit and disregarded a stop sign. The state was pursuing our client for causing the violent, multi-car crash. Our client made the mistake of talking to authorities prior to contacting a DUI defense lawyer Miami DUI defense lawyer. Read on to learn about the facts of the case and discover how we were able to help him out of this intimidating situation.

The Morning of the Accident

At approximately 5:40 AM, this client drove into an intersection and collided with another car. He exited his vehicle on his own. An unknown civilian assisted the driver of the other car out of his vehicle. Five to seven minutes later, the first police officer arrived on the scene. The officer encountered two individuals standing on the sidewalk some twenty to thirty feet from the vehicles. Our client was standing and leaning up against a poll. He had no signs of injury (cuts, bruises, or burns from air bags). The officer reported that he detected an odor of alcohol on the client's breath and that he had blood shot eyes and an unsteady gait.

Based upon these observations, the officer began to question the client about the accident. The officer then told the client that he had to perform field sobriety exercises in order to determine if he was impaired. At the conclusion of the interview and the testing, the officer placed the client under arrest for DUI. After searching the client and his car, the officer added the charge of possession of a controlled substance and drug paraphernalia. In his statement to the police, the client admitted to owning and operating the vehicle involved in the crash. In addition, he admitted to consuming alcohol and taking prescription medication.

What Could Be Done Against These Allegations? 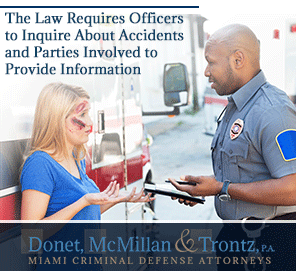 After reviewing the physical evidence, police reports, and witness statement, we immediately recognized serious problems with the prosecutor's case. The police officer had failed to follow legal procedure, and as a result, we were confident that evidence would be excluded. We filed a Motion to Dismiss, because the officer did not have probable cause to arrest the client. We also filed a motion to exclude the statement the client made about ownership of the car and operation of the car. This decision was based on the officer's failure to follow Florida Law regarding the "Accident Reporting Privilege". Moreover, we requested that the judge exclude our client's performance on the field sobriety exercises because the officer advised the client that these tests were compulsory.

How Did DMT Argue Against Probable Cause?

With regard to the lack of probable cause, we used our knowledge of Florida law to bolster our client's case. We argued that Florida law only allows a police officer to make a warrantless arrest on a misdemeanor if the offense was committed in his presence. It was obvious that this did not happen.

The prosecutor argued that the officer's investigation and personal observations gave him probable grounds to believe that the client had committed the crime. We successfully argued that the officer did not witness the crash, did not see the client behind the wheel of the car, did not observe injuries consistent with the client being involved in a crash, and the other driver never saw the client behind the wheel. Our second argument sought to exclude statements made by the client to the officer. Florida law encourages the investigation and determination of car crashes so that future crashes can be prevented. The law requires officers to inquire about accidents and the parties involved to provide information.

Why Is This Law So Important?

Were Our Arguments Successful?

At the trial setting the judge agreed with our legal arguments and excluded the statements of our client. As a result, the State of Florida could not prove an essential element of the case, that being the client was driving the car involved in the crash. Consequently, the State of Florida dismissed all charges against the client. This was a big victory for our client, and kept a man out of prison who had been improperly questioned by authorities.

If you're facing serious charges in Miami-Dade County or surrounding areas, contact our firm at (305) 444-0030 for help from our experienced legal team.

Categories: DUI
1.02k
Facebook Twitter LinkedIn Google+ Pinterest WhatsApp Email Copy Link Your browser does not support automatic copying, please select and copy the link in the text box, then paste it where you need it.
Don't Miss These Other Must Read Articles