Our Client Was Under Investigation from Miami's Internal Affairs Division. Learn How Expert Criminal Defense Attorneys Helped Him Stay Out of Trouble

787
Facebook Twitter LinkedIn Google+ Pinterest WhatsApp Email Copy Link Your browser does not support automatic copying, please select and copy the link in the text box, then paste it where you need it. 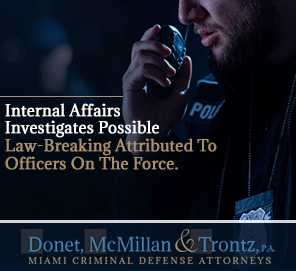 Are you a big fan of cop shows? If you've watched a crime show that came out sometime in the past three decades, then you are quite familiar with the feeling of dread surrounding the term "Internal Affairs" for members of law enforcement. The enforcers of police ethics are dramatized to be dogged, fearless, and unforgiving when it comes to even a hint of corruption among the force.

The drama is thrilling to watch, but in real life, it's serious, scary, and everything you say matters. We recently helped out a member of law enforcement in Miami-Dade County. The subject of the investigation was a retired Special Agent in Charge with a large police agency. The investigation focused on determining if a felony offense of Interception and disclosure of communication occurred. Our client was facing a felony criminal investigation by the Miami-Dade State Attorney Public Corruption Unit and Miami's Internal Affairs Division. Our client needed help from experienced Miami criminal defense attorney to make sure that he was protected throughout the investigation.

The Internal Affairs Division of a large police agency contacted the Miami-Dade State Attorney's Office for assistance on an in-house investigation to determine if a retired Special Agent in Charge had unlawfully intercepted a wire, or oral communication. The wire that was reportedly breached was a telephone conference wherein multiple police investigators from various jurisdictions conducted official police business of assessing and formulating future investigative strategy. The conference call was conducted on a secure line that required entry of an access code before an individual would be granted access. This investigation was launched when it was suspected that an unknown person or persons had illegally gained unauthorized access to the content of the conference call.

The following resources were gathered as evidence to determine who may have illegally obtained access to the conference. Subpoenas were issued for conference call billing records, call logs, email records, account information records, wireless phone subscriber information, cell phone records, and wireless geolocation records. As a result of this collection of evidence, the scope of the criminal probe turned to our client.

The Internal Affairs Investigator and the Miami-Dade State Attorney's Public Corruption Unit sought a search warrant for the seizure and examination of our client's cell phone, iPad and laptop computer. The investigators attempted to obtain passwords to these devices from the client. Based upon our advice and counsel, the client declined to provide the passwords. Fortunately, because the client had elaborate passwords, the investigators were incapable of accessing any of the devices for examination and potential recovery of incriminating evidence. 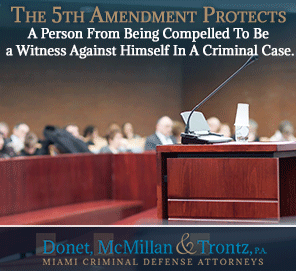 It is important to note that the service of a subpoena on a witness immediately grants immunity to the served individual. Therefore, although the person can be required to answer questions, none of the information revealed by the individual can be utilized in a criminal prosecution.

The Investigators Had No Case! Here's Why:

1. The speakers subjective expectation of privacy and
2. Whether society is prepared to recognize this expectation as reasonable.

We argued that the Client should not be arrested for four very important reasons:

We emphasized to the Assistant State Attorney that the above 4 factors would likely convince a jury that the speaker did not have a reasonable expectation of privacy. Furthermore, the investigators had no direct evidence collected from the Client establishing that he participated in the conference. In addition, they lacked any incriminating statements by the Client. Ultimately, the investigators and prosecutors agreed with our perspective and closed the investigation without an arrest.

If you or someone you know is being investigated by the Police Corruption Unit or Internal Affairs, contact Donet, McMillan & Trontz at (305) 444-0030. Every moment counts in preserving both your career and your criminal record in such an investigation.

Categories: Criminal Defense
787
Facebook Twitter LinkedIn Google+ Pinterest WhatsApp Email Copy Link Your browser does not support automatic copying, please select and copy the link in the text box, then paste it where you need it.
Don't Miss These Other Must Read Articles