Plastic Surgery Gone Wrong: Practicing Medicine Without a License Is One of the Most Common White Collar Crimes in Miami-Dade County

1.03k
Facebook Twitter LinkedIn Google+ Pinterest WhatsApp Email Copy Link Your browser does not support automatic copying, please select and copy the link in the text box, then paste it where you need it. 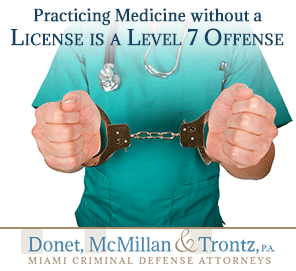 In the past few years, Miami-Dade County and Broward County have seen some pretty nasty cases involving practicing medicine without a license. The majority of these miami white collar crimes involve botched plastic surgeries that were performed in warehouses and private residences by individuals who had no idea how to perform a surgery and were certainly not licensed to do so.

Recently, a 39-year-old woman in Hialieah was prosecuted for performing two genitalia surgeries that, according to the Miami Herald, left a man maimed. This is just one of many fake cosmetic surgeries that has been performed in the South Florida area in the past few years  and the resulting damage from these operations can result in manslaughter charges, depending on the outcome for the victim. Florida Statute 458.327 prohibits the practice of medicine without a license, and while practicing medicine without a license is only a third degree felony, the crime is a Level 7 offense under the Florida Sentencing Guidelines.

What Is a Level 7 Offense?

Simply put, a Level 7 offense allows the state prosecutors to seek a prison term, even for first-time offenders. Another tool available to prosecutors to ask for prison sentences is victim injury points, which can be added to increase a defendant's statutory guidelines. In the unfortunate event that a person loses his or her life as a result of a botched surgery, a defendant is facing up to 15 years in prison under a manslaughter charge. 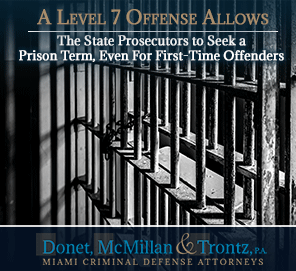 How Can You Defend Against Charges for Practicing Medicine Without a License?

Like all cases, defending these particular charges depends on the facts and evidence obtained the law enforcement and prosecutors. As stated in the article, one particular defendant pled guilty to performing two ill-fated surgeries that left patients mangled. Her illegal activities got her 40 months behind bars. Two other defendants are currently awaiting trial for manslaughter, as they are accused of killing their patients. If the state has sufficient evidence to prosecute these cases, it is highly likely that the defendants will enter negotiated plea deals down the road.

The Miami criminal lawyers at Donet, McMillan & Trontz have represented several clients charged with practicing medicine without a license. In one particular case, an individual opened a clinic in Miami and performed OBGYN exams on women and provided vaccines to children. He never received a medical license. While operating his clinic, he was also arrested for trafficking in an illegal substance (Oxycodone). With state cases pending in Miami-Dade and Broward County, the feds arrested and prosecuted him for insurance fraud. Another law firm tried the federal case. The defendant was eventually convicted and sentenced to 20 years in prison. DMT was able to negotiate concurrent pleas on the state charges, but the damage had already been done.

What Would Be Considered a Win?

As with any case, a positive outcome for a defendant charged with these offenses would be any sentence that does not involve incarceration. It is difficult to avoid jail or prison time when the state has sufficient evidence to prove the case and the victims either die or receive significant injuries as a result of the botched surgeries. Anyone charged with practicing medicine without a license or manslaughter is entitled to a bond as long as they have no prior incidents involving these types of crimes.

And If Someone Does Have Prior Incidents?

In short, the amount of the bond will vary depending on the facts and circumstances of any particular case. The court will also consider a person's past criminal history in determining the amount of the bond or whether a bond will be granted at all. As mentioned in the article, one defendant is being held without a bond because he has a long history or performing botched surgeries, and therefore in the court's eyes, he is a danger to the community.

The best advice to those performing surgeries without a license is not to do it. Prosecutors will vigorously pursue cases where citizens are injured or killed during the commission of this offense. Anyone being investigated for this crime must hire a criminal attorney experienced in defending these matters. Never speak to law enforcement investigators prior to obtaining legal representation. Never consent to a search of the premises. However, you should expect law enforcement to show up with a warrant signed by a judge. If warrant has been obtained, law enforcement will conduct a search with or without a person's consent.

If you find yourself in legal trouble, contact Donet, McMillan & Trontz's experienced legal team at (305) 444-0030 today.

Categories:
1.03k
Facebook Twitter LinkedIn Google+ Pinterest WhatsApp Email Copy Link Your browser does not support automatic copying, please select and copy the link in the text box, then paste it where you need it.
Don't Miss These Other Must Read Articles