President Trump Takes Office: What Are the Immigration Consequences?

1.01k
Facebook Twitter LinkedIn Google+ Pinterest WhatsApp Email Copy Link Your browser does not support automatic copying, please select and copy the link in the text box, then paste it where you need it. 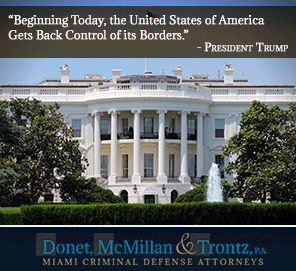 One of President Donald Trump's campaign promises was to crack down heavily on illegal immigration. So far, after just a few days in office, he seems to be serious about his plans to deport illegal immigrants who have criminal records and to reduce illegal immigration throughout the country. We've seen politicians attempt this before  to questionable success. This issue is huge (to quote Trump)  but will it be as fantastic as he has suggested, or will it be a challenge to implement on a state-to-state level?

First of all, your Miami criminal defense attorneys will address what exactly the Trump administration plans to do about illegal immigration. Then we'll dive into what is required to implement this plan, nationally and in the state of Florida. How will this affect cities and counties? How will being questioned or detained by authorities affect individuals who may be here illegally or have recently expired visas?

What Trump Wants to Do

In his recent speech to the Department of Homeland Security, President Trump stated that, "beginning today, the United States of America gets back control of its borders." What does that mean? Well, the overall goal of the administration is to significantly decrease the flow of people to this country from other nations, specifically two targets:

1. Those who come to the country illegally, and
2. Refugees and immigrants from Muslim countries.

To achieve this goal, Trump has made suggestions and signed executive orders dealing with criminal detention, deportation of criminals who are here illegally, deportation of illegals who have been charged with crimes but not yet convicted, increasing power to those handling deportations, and more. (DonaldJTrump.com)

To execute the first tier of his plan, the executive branch will have no problems. The president does however have authority to select how many refugees are admitted each year, and from which countries. It's likely that the overall refugee number will diminish and fewer Muslim refugees will be admitted. (Forbes)
However, the second part of his plan will be more of a challenge. The executive branch of the government will need quite a lot of cooperation on the state level to implement these promises.

Is Trump Implementing His Promises?

It's natural to be dubious of politicians and keeping promises. However, Trump seems very serious about both his major points on the campaign trail. Within less than a week of his inauguration, President Trump signed two executive orders that deal with illegal immigration.
The first was designed to begin building a wall on the border of Mexico. The second, and more pertinent order, was a 3-pronged piece of legislation designed to address what happens to those who cross the border illegally, to increase power to immigration agencies, and to take away federal funding from sanctuary cities.

Trump has granted power to the US Attorney General Sen. Jeff Sessions and the Secretary of Homeland Security Gen. John Kelly to withhold grant money from states and cities that refuse to cooperate with his plans  and this is the states' incentive to actually follow through with federal plans for illegal immigration.

What Are Sanctuary Cities?

Sanctuary cities are cities that do not cooperate with federal law enforcement when it comes to detaining illegal immigrants.

Is Miami a sanctuary city? Well, according to a Department of Justice report, Miami-Dade was listed as a community that refused to comply with US Immigration and Customs. However, local officials say that the area does cooperate with federal law enforcement when detaining immigrants. (WFLX.com) 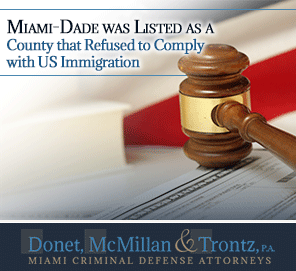 According to the Center for Immigration Studies, the following counties in Florida are considered sanctuary counties. Take a look at the list below or view the map at CIS.org.

The fact is, Florida has the third highest population of illegal immigrants in the US at approximately 900,000. (TampaBay.com) Our state is going to be a hotbed for the new illegal immigration laws and their implementation.

Yes! However, it may be more easily said than done. Many leaders of major US cities have made statements that they do not plan to change their policies on illegal immigrants. Mayor Eric Garcetti of Los Angeles has stated that he does not believe the federal government will be able to withdraw funding to LA, and it is their intention not to cooperate. "We feel very strong the legal case is clear," said Garcetti. The city receives approximately $500 million annually from the federal government. (LATimes.com)
Also, doing so may be considered unconstitutional. The 10th amendment defines the powers of the state and federal governments.

Amendment X: The powers not delegated to the United States by the Constitution, nor prohibited by it to the States, are reserved to the States respectively or to the people. (ConstituteProject.org)
Will Miami-Dade Cooperate?

In response to Trump's executive order, Miami-Dade County Mayor Carlos Gimenez dropped the sanctuary county policy on Thursday. He has immediately ordered jails to comply with requests from the federal government to detain illegal immigrants. (NewsMax.com) 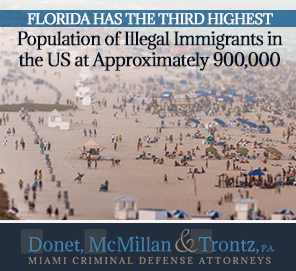 What Does All This Mean for Illegal Immigrants?

Florida follows a federal program called "Secure Communities". What this means is that all individuals who are arrested in the state are fingerprinted and then run through a database. The database will check their immigration status. Since Miami-Dade county is taking such a strong cooperative stance with the Trump administration's new policies, it's likely that immigrants who are arrested or charged with any crime, regardless of guilt, will be printed and screened. If found to be illegal, they may face immediate detention and processing. (FindLaw.com)

This also means that immigrants will be under a high level of scrutiny. It's imperative to have an attorney on speed dial and be careful when speaking to police, regardless of whether or not you are legal.

General John F. Kelly, Homeland Security Secretary, has implied that policies on deportation would be based on Trump's plans, but that law-abiding undocumented immigrants would "probably not be at the top of the list." (TalkingPointsMemo.com)

The Impact Will Be Extensive

 President Trump has the power to limit refugees and immigrants from Muslim countries. This will be his biggest area of impact  lowering the number of immigrants significantly as we continue to see fighting in Syria and surrounding countries.
 President Trump must have the cooperation of states to implement deportation. While New York and California maintain that they will not cooperate, the Florida House and Miami-Dade politicians have firmly agreed to cooperate. This means that any undocumented immigrants who are arrested will be detained and most likely deported.
 Plans to design a wall at the Mexico border are being created and an executive order has been signed. However, this plan still requires significant funding and implementation. If executed, the proposed wall paired with strong detention policies will make it more difficult for undocumented immigrants to come in from Mexico.
 The Trump administration will have to hire more border patrol and immigration officers, as well as create more detention facilities, to facilitate the increased arrests, detention, and deportation of illegal immigrants.

A Word of Advice

Whether you are illegal or documented, it's important to keep your documents present at all times and to also keep the number of an attorney at the ready. Any mistake in the database could result in deportation of someone whose documents may have lapsed, and swift contact with an attorney is crucial. If you or a friend is arrested in Miami-Dade county, and you are unsure about your immigration status, contact Donet, McMillan & Trontz at (305) 444-0030.

Categories: Immigration
1.01k
Facebook Twitter LinkedIn Google+ Pinterest WhatsApp Email Copy Link Your browser does not support automatic copying, please select and copy the link in the text box, then paste it where you need it.
Don't Miss These Other Must Read Articles