Two Theft Result in Vigilante-style Arrest. What Will the Defendant Face in Miami Criminal Court?

870
Facebook Twitter LinkedIn Google+ Pinterest WhatsApp Email Copy Link Your browser does not support automatic copying, please select and copy the link in the text box, then paste it where you need it. 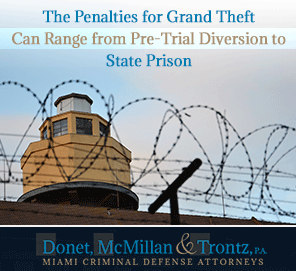 A Miami woman was arrested for bilking two men out of their personal property. Her MO is the same in both cases. While the newest allegation occurred recently in the City of Miami, the Miami Beach police were able to link her to a similar occurrence that took place almost a year ago. Investigators allege that Yomna Fouad would meet men in local night clubs, then return to their homes and have sex with them. After the men fell asleep, she would steal thousands of dollars in valuables. The interesting part of the story is that both the City of Miami and the Miami Beach police departments could not catch her.

Not Quite a Citizen's Arrest

Her latest victim decided to take matters into his own hands and went in search of Fouad. He went back to the beach and found her outside of a club. The victim and the defendant got in an argument, which resulted in the police arriving on the scene. The police figured out that she was wanted by the City of Miami and the Miami Beach Police Department. She was arrested under both cases and charged with grand theft charges. She was also charged with possession of a false Identification, which was probably on her person at the time of the arrest. These charges can have some severe consequences depending on how they occur  read on to find out what our Miami criminal defense lawyers have to say about it.

Simultaneous Cases Can Make for Exceptions

Fouad spent a couple of days in jail, then posted bail. She had bonds set in both cases as the arrests occurred simultaneously. Had she been arrested earlier on the first offense and was pending trial, then picked up the second offense, she would have been held without a bond for violating the conditions of her original bail. The disposition of Fouad's cases will depend largely on her past criminal record or lack thereof. If she has no prior criminal record, she will probably score non-state prison under the Florida Sentencing Guidelines. If this is the case, she may be able to avoid jail or prison time. With that being said, the victim's in both cases will have input and influence with the state attorney's as they are able to request what they feel is a fair punishment. Based on the tone of the article, it appears that both victims would like to see this young lady go to jail, especially because it seems as though neither will ever see their property again. 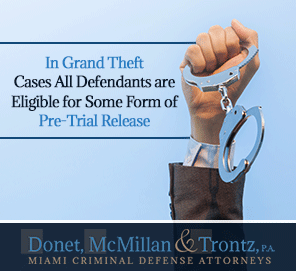 What Factors Influence a Theft Case?

The criminal lawyers at DMT have defended dozens and dozens of theft cases. The outcome of those cases is highly dependent on the amount of the loss suffered by the victim, the past criminal record, if any, of the client, and victim's input regarding what type of punishment the defendant should receive. Depending on the facts of the case, the penalties for grand theft can range from pre-trial diversion to state prison, with a probationary sentence ending up somewhere in the middle. The good thing about grand theft cases, is that all defendants are eligible for some form of pre-trial release. Remember, if you are being investigated for or have been arrested on theft charges, never speak to law enforcement. Invoke your Miranda rights and seek out a skilled and experienced defense attorney to protect your rights. Any statements made to authorities will be used in court.

For more information on what to expect when you go to trial, or to get representation from experienced criminal defense lawyers, contact Donet, McMillan & Trontz at (305) 444-0030.

Categories: Theft Crimes
870
Facebook Twitter LinkedIn Google+ Pinterest WhatsApp Email Copy Link Your browser does not support automatic copying, please select and copy the link in the text box, then paste it where you need it.
Don't Miss These Other Must Read Articles