What Are Drug Crimes, and How Should a Criminal Defense Attorney Handle Them?

910
Facebook Twitter LinkedIn Google+ Pinterest WhatsApp Email Copy Link Your browser does not support automatic copying, please select and copy the link in the text box, then paste it where you need it.

Over the years, one of the most common cases that the criminal lawyers at DMT defend are drug crimes. Nine times out of ten, our clients are arrested in their or someone else's automobile. Our experienced Miami drug crime lawyers have represented clients charged with the most serious of drug offenses (trafficking) to simple marijuana possession charges. 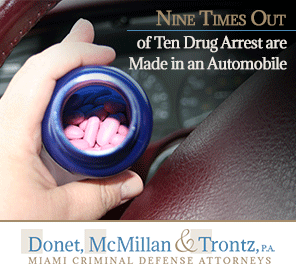 The Traffic Stop: How Does It Happen?

Police can stop vehicles for a variety of reasons. The most common reason to stop a vehicle is due to the commission of a traffic infraction. Illegally tinted windows, no seat belt, expired tags, defective taillights, rolling stops and missed traffic signals are simple citation offenses. However, these violations give the police the right to stop your vehicle and ask for a person's driver's license, registration, and proof of insurance. While the exchange is occurring, the police have the opportunity to see inside your vehicle and smell the interior as well. If an officer smells marijuana or sees illegal substances in plain view, he or she has probable cause to make an arrest.

What Happens Once You Are Arrested?

Once you are in custody, you can be sure that the police are going to search your vehicle with a fine-tooth comb. Once the officers have probable cause to make an arrest, they no longer need consent or a warrant to search a vehicle. If the cops find a little marijuana, a person is looking at simple possession charges, which are usually easy to resolve. If cocaine or other controlled substances are discovered, an arrest will be made with those charges. The charges will be more difficult to resolve, as we are now dealing with a felony as opposed to a misdemeanor. Obviously, cases will be more complicated and more difficult to resolve if a substantial amount of narcotics is found in the vehicle. The police will be looking for large sums of money, drug paraphernalia such as scales and pipes, and how the narcotics are packaged. If those items are discovered along with a large amount of a controlled substance(s), and if they are packaged in a certain way, a person could be arrested and charged with possession with intent or with trafficking if the amount of the narcotics meets or exceeds the statutory weight thresholds.

What Kind of Punishments Are You Facing?

In dealing with these cases, there is a wide range of punishments that are mostly dependent on the charges filed by the prosecuting office. Another significant variable is the venue in which the arrest occurred. An offense that is not a big deal in Miami-Dade County may be a big deal in one of Florida's smaller, less populated counties. Another variable is a person's prior criminal history. For obvious reasons, prosecutors will consider a person's record when attempting to resolve a case. With all that being said, the ramifications of a narcotics arrest depend mainly on three things; (1) the type and amount of drugs found in vehicle, (2) the venue where the arrest a occurred, and (3) a person's prior criminal history. To be more specific, a person could be enrolled in a pre-trial diversion program for the simplest of offenses, while others charged with a trafficking offense would face years in prison.

How Should Drug Charges Be Dealt With?

After handling hundreds of these cases, the criminal attorneys at DMT have a created a plan of action for clients arrested on drug charges. First and foremost, it is imperative to contact the prosecutor immediately after the arrest. Police officers have a nasty habit of overcharging defendants at the time of the arrest. We have been very successful in convincing prosecutors that the arresting officer has over charged the case. It is extremely important to convince the prosecutor that they should file simple possession charges as opposed to possession with intent or trafficking charges. It is much easier to obtain a favorable result when a client is only facing simple possession. For example, over the last several months, we have had several clients charged with possession with intent because of the manner in which the narcotics were packaged and the amount of money found in the vehicle. DMT has done exhaustive research into these issues and obtained voluminous materials showing these facts by themselves is not enough to charge the more serious offenses. Once provided with this information prosecutors have reduced the charges for which the defendants were arrested, allowing us to dispose of the cases with no jail time and on many occasions, obtaining a dismissal. 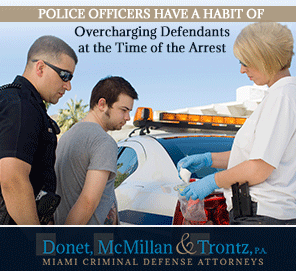 Is There Hope for Charges to be Dismissed?

Not only do the attorneys at Donet, McMillan & Trontz strive for charge reductions, we also try to prevent the filing of any charges. The most effective way to do this is to show the prosecutor that the stop and search was illegal. If convinced of that, the prosecutor will have no choice but to drop the charges. The difficulty there lies in the fact that prosecutors will tend to believe the officer over the client in how the stop and search occurred. As difficult as it is to refute an officer's testimony, Donet, McMillan & Trontz has been successful on several occasions in getting charges dismissed at the onset of the case.

What Should I Do When Stopped By Police?

(1) Never consent to the search of your vehicle,
(2) Never make any admissions to the police,
(3) Immediately invoke your rights, and
(4) Once bail is posted, hire a lawyer who knows and understands the system and has significant experience handling these types of cases. Be polite, but don't cooperate with the police.

If you or someone you know is facing possession, possession with intent, or trafficking charges, contact Donet, McMillan & Trontz at (305) 444-0030 for experienced representation.
Categories: Criminal Defense
910
Facebook Twitter LinkedIn Google+ Pinterest WhatsApp Email Copy Link Your browser does not support automatic copying, please select and copy the link in the text box, then paste it where you need it.
Don't Miss These Other Must Read Articles