Why Are Drug Possession Charges So Serious in Miami?

1.02k
Facebook Twitter LinkedIn Google+ Pinterest WhatsApp Email Copy Link Your browser does not support automatic copying, please select and copy the link in the text box, then paste it where you need it.

The criminal defense law firm of DMT, P.A. has represented hundreds of individuals charged with drug possession, drug sale, and drug trafficking over the past thirteen years. 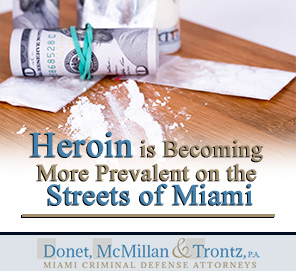 We have represented our clients regarding such illegal substances as cocaine, marijuana, LSD, Oxycodone, MDMA (Ecstacy), and heroin, just to name a few. DMT recently represented two individuals in federal court who ordered illegal substances from the Netherlands and were caught by the DEA picking up their packages. While attending a debriefing of one our clients, charged with running a marijuana grow house, we discussed the narcotics making a comeback in Miami. The prosecutors and narcotics detectives explained that heroin is becoming more prevalent on the streets of Miami. A few years ago, we represented an alleged heroin dealer that was charged not only with heroin trafficking, but murder as well. The state alleged that our client sold and used heroin with a teenaged female client who overdosed and died in his apartment. DMT filed numerous motions to suppress, and eventually worked the case out to a seven-year plea deal when the client was facing life in prison.

While the charges of possession of heroin and the sale of heroin are fairly serious charges, the plea offers and sentences are fairly commensurate with that of all felony drug possession charges in Miami and South Florida. However, the Florida sentencing statutes that deal with heroin trafficking are very harsh, and sometimes, they are even referred to as "Draconian". Florida State 893.135 sets forth minimum/mandatory sentences for individuals charged and convicted with heroin trafficking. Keep in mind, most people think that trafficking in illegal substances, including heroin, requires the sale or purchase of large quantities of drugs. Nothing could be further than the truth. Merely possessing a certain of amount of illegal substances in excess of certain weights will lend itself to a trafficking charge.

The most severe penalties for trafficking offenses relate to narcotics, such as morphine, opium, and the more popular drug heroin. Any person possessing between 4 and 14 grams of heroin faces a three-year minimum/mandatory sentence. 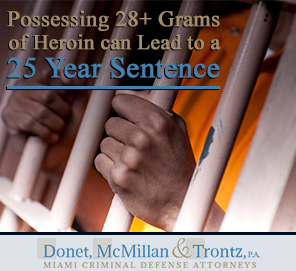 Anyone possessing 14 to 28 grams of heroin is facing a 15-year minimum/mandatory sentence. Possessing more than 28 grams can land a person in the state prison for 25 years. Keep in mind that 28 grams does amount to a large quantity of heroin. The reason why the sentences are so insane is due to the danger of opiates like heroin. According to the U.S. Center for Disease Control and Prevention (CDC), there were 28,647 opiate related deaths in 2014. These figures include synthetic opiates and natural opiates, such as heroin. A DEA study showed that the number or heroin-related deaths rose from 3,036 in 2010 to 10,574 in 2014. This why prosecutors and legislators treat heroin differently than cocaine and MDMA. Synthetic opiates, such as Fentanyl, are also causing death rates to explode as well.

Synthetic painkillers, such as hydrocodone, most often found under the label Oxycodone, are punishable in the same ways as opiates and heroine. Trafficking in these substances carries the same minimum/mandatory sentences as the same weights of heroin. This is due to the highly addictive and dangerous nature of the drug. While, these drugs can be legally prescribed as painkillers, many South Florida clinics and pharmacies have been responsible for the illegal distribution of these drugs without prescriptions. The clinics and pharmacies are often referred to as "pill mills". Investigations and arrests related to pill mills were more prevalent a couple of years ago, however, individuals arrested in connection with these businesses, whether they be doctors, pharmacists, or nurses, all face the same sentences as heroin traffickers.

The best advice a criminal lawyer can provide is to stay away from any involvement in the above mentioned narcotics. Defendants charged with possession, sale, or trafficking in the substances will be looked at and treated differently by prosecutors throughout the State of Florida and the United States. Anyone arrested for any of these charges should invoke their Miranda rights and request an attorney. Any statements can and will be used to prosecute someone both in state and federal court.

Are you facing a serious criminal charge? Contact Donet, McMillan & Trontz to have your case evaluated.

Categories: Drug Offenses
1.02k
Facebook Twitter LinkedIn Google+ Pinterest WhatsApp Email Copy Link Your browser does not support automatic copying, please select and copy the link in the text box, then paste it where you need it.
Don't Miss These Other Must Read Articles