248
Facebook Twitter LinkedIn Google+ Pinterest WhatsApp Email Copy Link Your browser does not support automatic copying, please select and copy the link in the text box, then paste it where you need it. 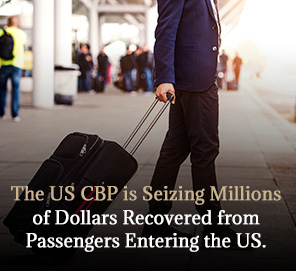 The U.S. Customs and Border Protection ("CBP") is seizing millions of dollars recovered from passengers entering the United States. The Miami criminal lawyers at DMT have seen an uptick in the seizures of an unreported amount of currency from international passengers. Seizures of cash for failing to report currency to the CBP is a common occurrence at Miami International Airport (MIA). Miami is an international hub of travel to the United States. The magic number is $10,000. It is not a crime to carry more than $10,000, however, there are federal reporting requirements that maintain that international travelers either entering or exiting the United States must report to the CBP the possession of more than $10,000. The CBP along with the Department of Homeland Security is stepping up efforts to prevent what is called bulk cash smuggling. 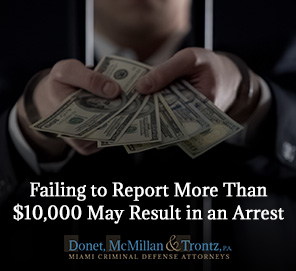 Failing to report more than $10,000 may result in an arrest and most certainly a seizure or forfeiture of the cash. Any individual can be charged and prosecuted both in state and federal court.As such, the money may be seized by both state and federal authorities. Just because authorities seize cash from an individual, it does not mean that all or a portion of the money cannot be recovered. Anyone who had cash seized must show or prove to the authorities that the source and intended use of the currency were legitimate. While that sounds easy, it is sometimes difficult to prove where the money came from and the purpose for which the cash was intended to be used. The criminal lawyers at DMT have defended dozens of individuals charged with illegally transporting money into the United States. Included in our defense of the crime itself, we have successfully petitioned for the return of all or some of the money that became the subject of a forfeiture proceeding.

Federal authorities believe that anyone in possession of more than $10,000 is up to some form of criminal activity, including drug trafficking, money laundering, and tax evasion to name a few. If you have money seized at the airport, make sure the agents provide you with a receipt that contains the FPF number. This receipt will provide information regarding the amount of the money seized, the name or names of the agents who seized the cash, and the contact information for the agents who seized it. Demand a receipt as CBP agents have been known to take cash without providing a receipt. Without a receipt, you may be out of luck as there is no evidence that the money was ever taken. If you are caught up in this situation, immediately contact the attorneys at DMT as we have years of experience defending these types of cases and a proven track record for getting our client's money back to them. 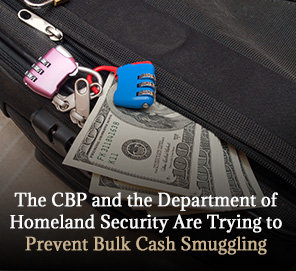 Our attorneys have been successful in securing the return of cash by proving that the CBP agents did not follow the proper constitutionally required protocol when seizing the currency. For example, international travelers must be put on notice of the required reporting requirements. Another example of misconduct by the CBP is when they take an excessive amount as a result of a minor breach of the reporting requirements. Remember, that failing to know and understand the required reporting rules is not a defense to the crime or accompanying forfeiture. The law only requires that a person know they were carrying more than $10,000 in cash. The government can charge you with a crime as well as impose the forfeiture action. While most people are not charged, in the majority of the situations the cash will almost always be seized. Always act quickly and hire a qualified forfeiture lawyer as there are time limits as to when to respond or file an answer to a forfeiture action.

Categories: Federal Crimes
248
Facebook Twitter LinkedIn Google+ Pinterest WhatsApp Email Copy Link Your browser does not support automatic copying, please select and copy the link in the text box, then paste it where you need it.
Don't Miss These Other Must Read Articles