What Should I Do if I've Been Charged With Paycheck Fraud?

356
Facebook Twitter LinkedIn Google+ Pinterest WhatsApp Email Copy Link Your browser does not support automatic copying, please select and copy the link in the text box, then paste it where you need it. 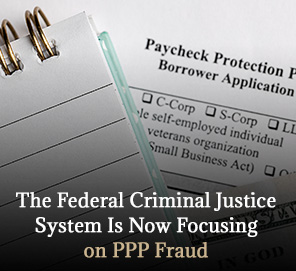 With each passing week, federal prosecutors are holding more and more press conferences regarding the latest arrests and indictments involving Paycheck Protection Program (PPP) fraud. Anyone indicted for PPP fraud should seek the assistance of the Miami criminal lawyers at DMT, all of whom have years of experience in federal court. As the PPP is a relatively current event, only a few indictments have been handed down, with even fewer cases being resolved at this time. With the decline in mortgage and Medicare fraud cases, the federal criminal justice system is now focusing on these cases. Like Medicare and mortgage fraud cases, the offense level under the federal sentencing guidelines for fraud is relatively light. The severity of the potential sentence rides on the amount of the loss to the federal government. Keep in mind that a litany of charges can also be filed.

Currently, federal authorities such as the Department of Justice (DOJ), Internal Revenue Service (IRS), the Federal Bureau of Investigation (FBI), and the US Small Business Administration Office of the Inspector General (SBA-OIG) are actively conducting PPP loan fraud investigations. Since its inception in March 2020, there have been millions of dollars allegedly fraudulently taken and spent contrary to rules and regulations set forth by the program. The investigations are leading to arrests on a multitude of charges as business owners and company executives who are now facing potentially long prison sentences and huge fines. 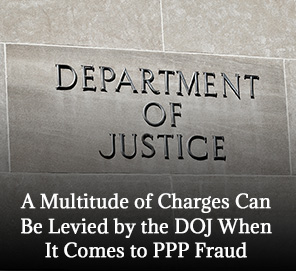 A multitude of charges can be levied by the DOJ when it comes to PPP fraud. The feds will likely get together to determine which charges will be filed in these cases to maintain consistency. The charges the feds will be able to select from include: False Claims Act Violations, False Statements to the SBA, Making False Statements to a Bank, Bank Fraud, Wire Fraud, Aggravated Identity Theft and Tax Evasion. The potential sentence will be determined by federal sentencing guidelines. The offense that allows for the greatest potential incarceration will determine the sentencing range. This range is not dispositive of the sentence as a federal judge can depart below and above the guidelines. The range is only a recommendation to be used by the judge in formulating an appropriate sentence. 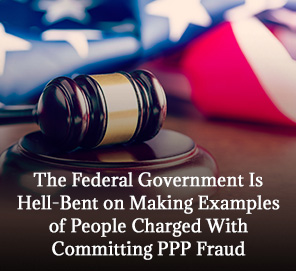 As one can see, the federal government is taking these cases seriously and is hell-bent on making examples of people charged with committing PPP fraud. Here are a few pieces of advice. If you are being investigated or have been arrested, do not provide a statement to the authorities. Any incriminating statements will be used by the government to prosecute your case. The most important piece of advice for someone who has been arrested for PPP fraud or is being investigated for the same is to immediately seek out a qualified federal criminal lawyer. Make sure, the attorney you hire is well-versed, experienced, and knowledgeable in the federal criminal system. These are not state cases and they are handled very differently.
Categories: Federal Crimes, Fraud
356
Facebook Twitter LinkedIn Google+ Pinterest WhatsApp Email Copy Link Your browser does not support automatic copying, please select and copy the link in the text box, then paste it where you need it.
Don't Miss These Other Must Read Articles