What is the difference between a misdemeanor and felony in Florida?

1.13k
Facebook Twitter LinkedIn Google+ Pinterest WhatsApp Email Copy Link Your browser does not support automatic copying, please select and copy the link in the text box, then paste it where you need it. 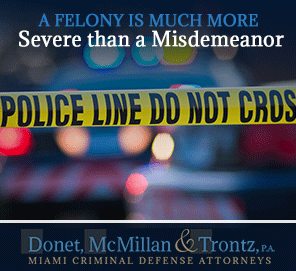 If you open up any news story about a criminal arrest in Florida, somewhere in there you should see mention of the alleged perpetrator facing either misdemeanor or felony charges. In fact, virtually every criminal violation in the state's legislation will be sorted into one of these two expansive yet dissimilar categories. But you probably will not find in that news article is an actual breakdown of the differences between a misdemeanor charge and a felony charge in Florida. So what are they? And why are the differences so important?

In simple terms, a felony charge is considered much more severe than a misdemeanor charge. Whereas most misdemeanors only concern local governments, a felony can escalate to a federal level and involve a team of prosecutors.

Some examples of misdemeanors in Florida include:
Some examples of felonies in Florida State law include:
At a cursory glance, you can see the clear distinction in the severity of the crimes counted as misdemeanors and those counted as felonies. In turn, the monetary penalties and time sentenced behind bars will generally be much lower for a misdemeanor than a felony. In fact, most misdemeanors cannot sentence you to county jail for more than a year while most felonies will sentence you to state prison for at least a year.
Additional Differences Between Felonies and MisdemeanorsTelevision series and detective stories always show the accused in court while their attorney presents an argument to the jury. In reality, the Florida State criminal justice system does not have to use a jury trial to convict someone arrested for a misdemeanor. Instead, there are no preliminary hearings and a judge will oversee the case and come to a verdict or decision based on their own discretion; at this judicial hearing, a criminal defense attorney may still be present to advocate for the defendant. Only when a felony is in question will there be preliminary hearings and a jury trial. Additionally, if you are accused of a felony, you could be kept in prison while you await the trial.

Misdemeanors and felonies in Florida also affect your criminal record and the rest of your day-to-day life differently. A misdemeanor may be expunged or sealed away so potential employers or educational institutions cannot see or access them, but a felony is typically much more difficult to remove. Also when you are convicted of a felony, you can lose your right to own a gun or vote, often for the rest of your life.

The most important thing about misdemeanors and felonies is not what makes them different but what makes them similar: your right to defend yourself. Allow our Miami criminal defense attorneys from Donet, McMillan & Trontz, P.A. to come to your side and shield you from a harsh and unforgiving criminal justice system. From the slightest of misdemeanors to the severest of felonies, we are fully prepared to take on your case and uphold your rights.

Contact us for a free consultation by dialing (305) 444-0030 today.
Categories: FAQ, Felonies, Misdemeanors
1.13k
Facebook Twitter LinkedIn Google+ Pinterest WhatsApp Email Copy Link Your browser does not support automatic copying, please select and copy the link in the text box, then paste it where you need it.
Don't Miss These Other Must Read Articles